Longtime readers of Hellnotes will remember about a year back I did a review of Season One of the awesome, and very British, TV show Misfits. That’s the one that takes the idea of super heroes and puts a dark, funny, and often darkly funny spin on it. For those that missed that review and/or are late to the Misfits party, you can read what I thought about it here: http://hellnotes.com/misfits-season-one-dvd-review Since then, Season Two came out and like Simon, the misfit with invisibility powers, it sunk past me without me noticing. Now comes Season Three, but I would be remiss if I talked about it and didn’t cover Season Two first . So lucky you, this is a two for one review of both Seasons Two and Season Three of this wonderfully weird TV show from the BBC. For those like me that need to catch up, keep on reading. If you already know about Season Two, feel free to jump ahead a bit. Now, without further ado, let’s get super!

Season Two of Misfits collects the six episodes (yes, many TV shows from the UK seem short to American viewers used to twelve to twenty plus episodes per season) of the second season, or series as it’s known on that side of the pond. It also has the Christmas one-off that acts as a bridge between this season and Season Three. As for the story, it starts right where the cliffhanger left it at the end of Season One with Nathan finally finding out what his special power is only after dying, being buried, and coming back to life. Hey don’t look at me like that. That was last season, so it’s fair game. It also illustrates the feel this show goes for. Don’t worry, from here on out, it will be a spoiler free zone.

For example, introduced this season is a mystery masked individual who is keeping an eye on the misfit crew, directing them, and sometimes even saving them from afar, but I sure won’t tell you who he/she/or it is as the big reveal later on is quite good. Also the little deadly secret of slightly psychotic Simon from last season comes to light, and all of the five leads get their moment to shine and more of their backstories detailed. There are plenty of adversaries of the week with a whole slew of super powers to contend with, not to mention the misfit team living up to their name, always seeming to get deeper and deeper into trouble. Highlights of this season include a John Carpenter’s The Thing-like episode with a shape shifter and lots of identity questioning paranoia. Then there’s the GTA inspired episode, and if you don’t know what GTA stands for, I won’t ruin it for you here. There are drugs that make the misfits powers act in the opposite way they’re supposed to, deadly daddies with things for their daughters, A Magneto of milk products (the comic book fans will get that one), not to mention lots of inappropriate humor, sex, the occasional nudie bit, and more goodness that should tell you that (A) this super hero TV show isn’t for kiddies and (B) what kind of crazy cool you can expect to find in Season Two. Oh and did I mention a bit of implied, good natured bestiality? Ah well, on to Season Three.

Season Three has just come out, it’s packed onto three DVDs, and is comprised of eight episodes. Right from the beginning things are up in the air. In fact many things have changed from the first two seasons. But have they changed for the better? Well let’s find out.

First and foremost, everyone’s favorite snarky smartass, Nathan, is sadly no longer with the show and his absence is clumsily explained as “oh yeah, he’s in Vegas with his girlfriend.” He’s been replaced by a guy with a slight case of Jekyll and Hyde syndrome and I’ve got to say, this was not a trade up. Then there’s what happened at the end of the previous Christmas special, where all of the misfits were given a chance to get new special powers, and that takes some getting used to for both them and the viewers. The problem is that most of these new powers seem to be rarely utilized in any significant way here. But then, the actual super powers in this super hero show have always been secondary to the humor, well written characters, and intricately connected storylines. Probably the weakest bit of this season is that by the end of the very first episode, the misfits are back doing community service for a new crime. Instead of being funny, that just seemed like lazy, uncreative writing done in an attempt to hit the reset button because the show was too afraid to let the main characters change and grow.

So Season Three does stumble a bit, but it doesn’t fall completely flat on its face. By and large it still delivers the goods. Highlights include an episode where Curtis, the onetime time rewinder and now sexual switch-changer, explores his new feminine side in-depth. There’s the super hero obsessed comic book artist that begins to manipulate one of the misfits to his own ends. And then there’s the time travel oops that leads to the Nazis ruling the world episode. Because everything is made better with Nazis to beat up, right?

As for the extras on these two multi-DVD sets from the BBC, Season Two has a selection of bonus (read as deleted) scenes, four featurettes; “Getting the Look”, “Designing Misfits”, “Life on Misfits”, and “winning the BAFTA”, which is the British Academy of Film and Television Arts. It’s sort of like their Oscars. There are behind the scenes bits on all seven episodes that look at each one individually. Season Three has more behind the scenes features for each episode and five featurettes on “Visual Effects”, “Stunts”, “On the Set with the Misfits”, “Erazer Webisdoe” and “Vegas Webisdoe.”

Misfits Seasons 2 & 3 continues and adds to an already great show. If you’re a fan of Season One, getting these two seasons is a no-brainer. If you have yet to jump on board the Misfits bandwagon, start at the beginning, obviously, and then be sure to pick up Misfits Season 2 and Season 3. Consider both of these DVD sets highly recommended. 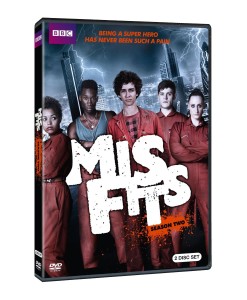 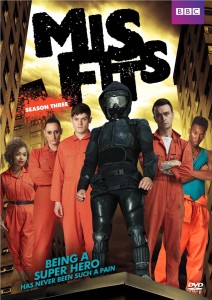