Misery and Death and Everything Depressing – Book Review 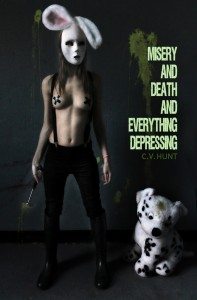 If you are looking for stories full of happiness and life and everything Disney, then C. V. Hunt is probably not the one to run to. She doesn’t just dwell in the shadows but in a deep dark cave. With a flashlight. But no batteries.

Yet that doesn’t mean Misery and Death and Everything Depressing doesn’t have its moments of humor, albeit very dark. It is also full of deep reflection and makes you think a bit about what an odd deal this thing called “life” is. Something that is often defined not by the light but by the ever-threatening and sometimes overwhelming darkness. C.V. Hunt may be called a writer of horror but I find her to be an astute observer of human nature who wraps her insight in the blackest paper she can find.

There are seven pieces of fiction in this 134 page book. While some of her previous fiction has a surreal Bizarro tint to them, these stories seem more engulfed in real life, even when a supernatural or impossible situation comes up.

“The Quarry” reads like a crime noir where two misfits commit a crime. Yet we are shocked by the ending even though the author was clever enough to give us a hint at the beginning. “No Room for a Child” may be the closest thing to a traditional horror or ghost tale and it is a really good one with a twist only Hunt can conjure up. “Human Contact” goes a different way. It is a “slice of life” story that I would expect to find in a typical literary journal. It touches on the issue of human intimacy in a disturbing but thoughtful way. But the mini-masterpiece in the collection is “Baby Hater.” It is the type of story that repulses you yet keep you enthralled to the end. You may even feel a little scared that you are actually identifying with the protagonist…and you just might. This tale alone is worth the price of admission and more.

I wish I could say they all work but there are a few that don’t, at least in my mind. “To Say Mother Teresa Was shocked When She Woke Up In Hell Would Be An Understatement” is a great title but it houses a brief story that is basically a one punch jab. “Last Woman on Earth” is essentially a suicide story with little to distinguish it despite the interesting apocalyptic set-up. And “The Last Entry” grabbed me from the beginning yet left me hanging. Probably intentionally but hanging nonetheless.

Yet the rest of the fiction more than makes up for them and shows Hunt at her best, especially that devilish awesome “Baby Hater.” This would be a good introduction to Hunt’s complex but depressing world as it shows off a number of her strengths and her ability in several genres. A highly recommended read to those who wish to discover an under-recognized writer.