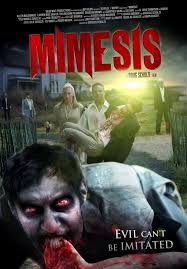 Mimesis: Night of the Living Dead

The definition of the word mimesis is to imitate or mimic. When one gives a film the title Mimesis: Night of the Living Dead it allows a filmmaker to have carte blanche and do what they will, good or bad, with a much revered classic such as the 1968 George A. Romero film; coupled with the fact that Romero’s film is in that unfortunate wasteland of public domain. Literally anyone can make a film using his title.

The good news is Mimesis: Night of the Living Dead is an entertaining horror film and one with a creative slant. I had the lowest of hope when I watched the film and by the time it ended, I discovered that I had a good time.

Directed by Douglass Schulze, who directed 2009’s sadly under seen Dark Fields, Mimesis: Night of the Living Dead tells the story of a group of horror fans who are invited to a party, pass out, and when they awaken from their drug induced slumber, they discover the terrifying truth that they have become unwilling participants in a deadly role playing game surrounding the classic Night of the Living Dead. Each person is outfitted as a character from the original film and all are manipulated into performing the actions of the 1968 film’s cast, as they are, in fact, attacked by zombies.

As things begin and the characters try and piece together what is happening, the film builds a nice amount of tension that carries on throughout the first act. The first shot of a zombie is at once homage to a scene in Romero’s original and a good moment of tension. When the first character dies it comes as a surprise and we are genuinely shocked.

The director has laid out many references to the original film without being disrespectful. The character’s first names are the same as the names of the actors in the original. There is the all too familiar farm house, the cemetery, the burning truck, and much more. It helps to have a working knowledge of Romero’s film to fully enjoy the nuances here.

The zombies adhere to the “Romero Rules” of Zombiedom. They move slowly and have dead eyes with blue-ish faces. Here there are only four of them and they exhibit some weird behavior; the reasons of which I cannot go into due to spoilers.

The cast is hit and miss in the acting department. There is a nice cameo from Courtney Gains of Children of the Corn and Colors fame and legendary character actor Sid Haig has a small but pivotal role as a horror filmmaker. It is nice to see him playing a normal guy for a change.

The lead actor, Alan Maldanado, is a major deficit for the film. He plays Duane, the reluctant black hero modeled after Duane Jones in the original.  Maldanado is a really bad actor and when he plays it cool he comes off as pathetic. When he assumes the role of the hero he fares even worse. I do not know what the director saw in this guy to make him his lead but he wrecks many scenes due to his lack of talent.

I have only one other flaw with the film. I fear, and I am merely speculating, that the filmmakers used their idea as an excuse to latch onto the Romero classic and, perhaps, get their film noticed. I hope that is not the reason for making this film. I found the idea to be completely original.

The director says he is planning sequels to this film revolving around other horror classics. I will look forward to seeing what he comes up with.

Mimesis: Night of the Living Dead is no horror classic, but in today’s world of mediocre horror cinema it is a film done with a bit of originality and care.