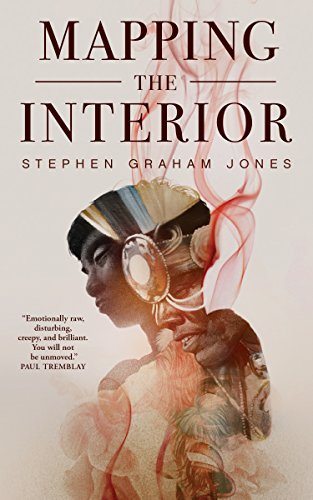 When it comes to great American authors, the southern US has bred more than its fair share. Names like Joe R. Lansdale and Flannery O’Connor come instantly to mind, as does the legendary Cormac McCarthy. And they don’t get much more American than Blackfeet author Stephen Graham Jones, nor, to my thinking, much greater. A relatively new discovery for me, Jones became an instant favorite with his collection, The Ones That Got Away, and further cemented that status with After the People Lights Have Gone Off, another compilation of some of the best short stories I’ve read in my life. Following along on the heels of those two exemplary books, I’ve since read Mongrels, the most brilliant werewolf story I’ve ever read, and “The Night Cyclist,” a Tor.com original story that has him taking the vampire legend in a direction nobody’s taken it before and confirming his position as the author I currently consider to be my favorite working storyteller. Because there are no templates in Jones lexicon. Every single story or novel he writes is a completely unique thing, even when he’s embracing tried and true themes, and you know that when you come to his work, it’s always going to be something completely new and fresh. His newest novella from Tor.com continues that trend in stellar fashion.

Mapping the Interior introduces us to Junior, an American Indian teenager living with his single mother and little brother, Dino, in a small modular home in the middle of nowhere. Beginning with the enticingly enigmatic sentence,

“I was twelve the first time I saw my dead father cross from the kitchen doorway to the hall that led back to the utility room.”

Jones leads us immediately forward into this haunting tale of a young boy trying to find his way—and himself—in a lonely world, protecting his little brother from bullies while studying the mystery of his father’s ghostly appearance and seeming guardianship. Junior finds himself being rescued from danger on a few occasions by some unseen force that he is certain is his father and, in time, comes to believe is in the process of “returning” to them, somehow becoming more whole with each visitation he makes. But, in the process of trying to solve the riddle of his father, he may be pushing his little brother closer to a grave danger that only he can save him from.

There are two things that are always true of any story you read by Stephen Graham Jones. First, they are always painfully human. Jones exposes the raw, bleeding edge of emotion in all its stark clarity, exposing the reality of his characters more through the depths of their feelings than through the use of a ton of dialogue or backstory. He’s the only author I can think of other than maybe McCarthy, who can paint a scene in blood and viscera and leave you feeling like you just read a chapter of Where the Red Fern Grows. The other thing that stands out in all of his work is his uncommonly graceful, literary eloquence. His words are a balm on the spirit, pure poetry rolling off the tongue as smoothly and effortlessly as notes from a guitar, often leaving you breathlessly saying, “wow.” If you ever want to know what’s meant when someone calls an author’s prose magical, you need look no further than Jones:

“To sleepwalk is to be inhabited, yes, but not by something else, so much. What you’re inhabited by, what’s kicking one foot in front of the other, it’s yourself. It doesn’t make sense, but I don’t think it’s under any real compulsion to, finally.”

Jones is, as the saying goes, a reader’s writer, his language is as spare and thoughtfully cadenced as a master painter’s brushstrokes, creating word pictures on the canvas of our brains and leaving us aching for more of the vivid imagery that is his stock in trade.

As I’ve said with pretty much every book I’ve read by Stephen Graham Jones to date, Mapping the Interior is one of the best stories I’ve read this year, infinitely memorable and re-readable, a tale that, like Mongrels and The Night Cyclist before it, will stick in my thoughts for some time to come. It’s a dark, brooding, and immensely compelling read that could have come from no other but Jones’ pen and it’s one you’ll come to cherish so long as you don’t come to your fiction looking for happy endings. Stephen rarely deals in emotions of the warm fuzzy variety and you won’t find any here. Junior is one of the most painfully sympathetic characters I’ve encountered in a long time and the terrors he experiences, the decisions he has to make, are guaranteed to break even the hardest of hearts.

Like all the stories and books that have come before it, Mapping the Interior is another brick in the wall of adulation that I’ve begun to build for the great Stephen Graham Jones. Not only is he a top-notch horror writer, he’s one of the best damn authors we have working today, period, sans genre, and you’d be hard put to find anyone as good, let alone better than him. If you haven’t read his work yet, do yourself the biggest literary favor you’ll do yourself this year and grab this book.