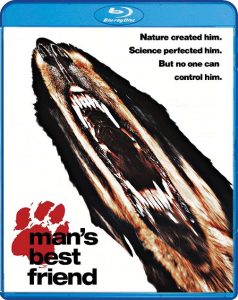 Man’s Best Friend is a cautionary tale of the dangers of genetic testing on animals, specifically on huge Rottweilers. You know, the dogs they always use in the Omen films because of how intimidating they look. Gee, what could go wrong with giving one of those near-superhuman (for a dog) powers? Well, grab your Scooby Snacks, a rolled up newspaper, and let’s dive into this early 90s bit of silly.

Ally Sheedy is a would-be investigative reporter who wants to do a story about the local animal testing science lab to show how inhumane they are. In trying to do so she meets Max, a lovable, and very large, Rottweiler. After Max saves her from the mugger she decides to take the big, lovable doggie home. Yeah, she doesn’t know that Max killed the mugger and hid the body, but I am sure that won’t come into play.

Enter the always awesome Lance Henriksen as the evil scientist who made Max out of the DNA of all kinds of animals. That means the good boy can climb trees like a cat, swallow animals like a python, is super smart like a…uhm…human, I guess, and can piss acid like a…okay, I’ve got nothing on that. Because of all this genetic manipulation poor Max is psychotic and soon the bodies will be hitting the floor, including mailmen, dog catchers, the neighbor’s cat, and more. There is also dog-on-dog rape in here, so yeah, there’s that.

So Lance and the cops are tracking down the deadly doggie and Ally has no idea how murderous Max is. This film is pretty uneven in both tone and plot. At first it’s a bit of whacky hijinks in the vein of “oh that Max, what a card.” But as it goes it gets darker and darker until at the end Max is peeing acid into people’s faces and chasing down a speeding car like a four-legged, furry terminator. There is also a bit of sadness here because poor Max doesn’t want to be a bad dog, but he was designed that way. The acting is good, especially from the always-dependable Lance Henriksen, and the direction is capable.

Let’s get to those extras on this new Blu-ray release from Scream Factory. The star of the show here is an audio commentary with writer/director John Lafia. Sadly, after that there are just a few trailers and TV spots. So there’s not a whole lot of extra to be found here, but it isn’t bare bones, either.

Man’s Best Friend is a fun, not-too-serious horror-action movie that reeks of the 90s, not that I am saying that is a bad thing. It’s an “evils of science” movie with laughs, some action, and surprisingly some heart. But that could just be me, I am a dog guy. It’s uneven and not great, but I do enjoy it for more than just nostalgia value. So consider this one recommended.