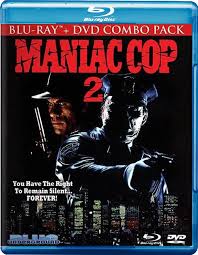 The first Maniac Cop from 1988 was a surprise cult hit, a bit of bloody slasher fun, set in the biggest of big cities, with an unlikely villain, and two genre giants leading the cast in Tom Atkins and Bruce Campbell. So in 1990, writer Larry Cohen and director William Lustig teamed up once again to unleash the mutilated, undying, Jason Voorhees with a badge, policeman Matt Cordell, the maniac cop. They wanted to see if their big bad policeman could become a bona fide horror icon. Did they succeed? Well grab your gun and your nightstick, we’re going back to New York, so be wary of anyone dressed as a policeman.

Oh and real quick: for all you Bruce Campbell fans out there, be prepared to be disappointed. Yes he is in this movie, but he gets bumped off early on in the film. This is not a Campbell movie. Good on Blue Underground for not playing up his involvement on the Blu-ray case like some early editions of 1989’s Intruder did for Campbell’s 2 minute cameo at the end of that one. You still with me? OK, let’s move on.

Here the maniac cop is back from the dead and this time his bloodlust has a personal motivation. While in the first movie he basically killed anyone unlucky enough to cross his path, here the murderous Matt Cordell is out for revenge. Not only on the convicts that murdered him in prison, but also those members of “the system” that sent a good cop to jail for daring to expose crooked cops. Yes, this time around we get more of the maniac cop’s background, and his murders even seem to have righteous motivations, as he seems to be out to punish the guilty more than just indiscriminately killing anyone.

Put on the case of stopping the murder machine Matt has become is Robert Davi as the typical hardnosed detective and Claudia Christian as a police psychologist. They not only have to guess the manic cop’s next move, but unravel the mystery why so many high-ranking cops want to keep Cordell’s real past a secret. So this movie is part slasher, but it is more so a police procedural that just so happens to have an undying killer in it. So slasher fans purists may be disappointed here, but if you’re looking for a pretty good mystery/thriller/cop movie with slasher overtones, you’ll get a lot more out of Maniac Cop 2.

In addition to looking really good, this new Blu-ray/DVD combo pack from Blue Undergound comes booked (ha) with some nice extras. There is an audio commentary with director William Lustig, a pretty good making of featurette/retrospective called “Back on the Beat”, and a Q&A with director Lustig. A deleted scene, an isolated music track from the movie, trailers, and poster and still gallery can also be found here.

Maniac Cop 2 is not as good as the one that preceded it, it’s lacking that one’s originality, and actors Davi and Christian aren’t bad, but they are no replacement for Tom Atkins and Bruce Campbell. The titular deadly policeman gets much more fleshed out here and there’s more motivation for his reign of terror. Speaking of that reign, there are more kills in this sequel than there were in the first movie, so lovers of high body counts will be happy about that. If you were a fan of the first killer cop flick, you’ll probably like this one too. If you weren’t, then this one won’t do anything to change your mind. So consider this one a conditional recommendation for the Maniac Cop fans out there.