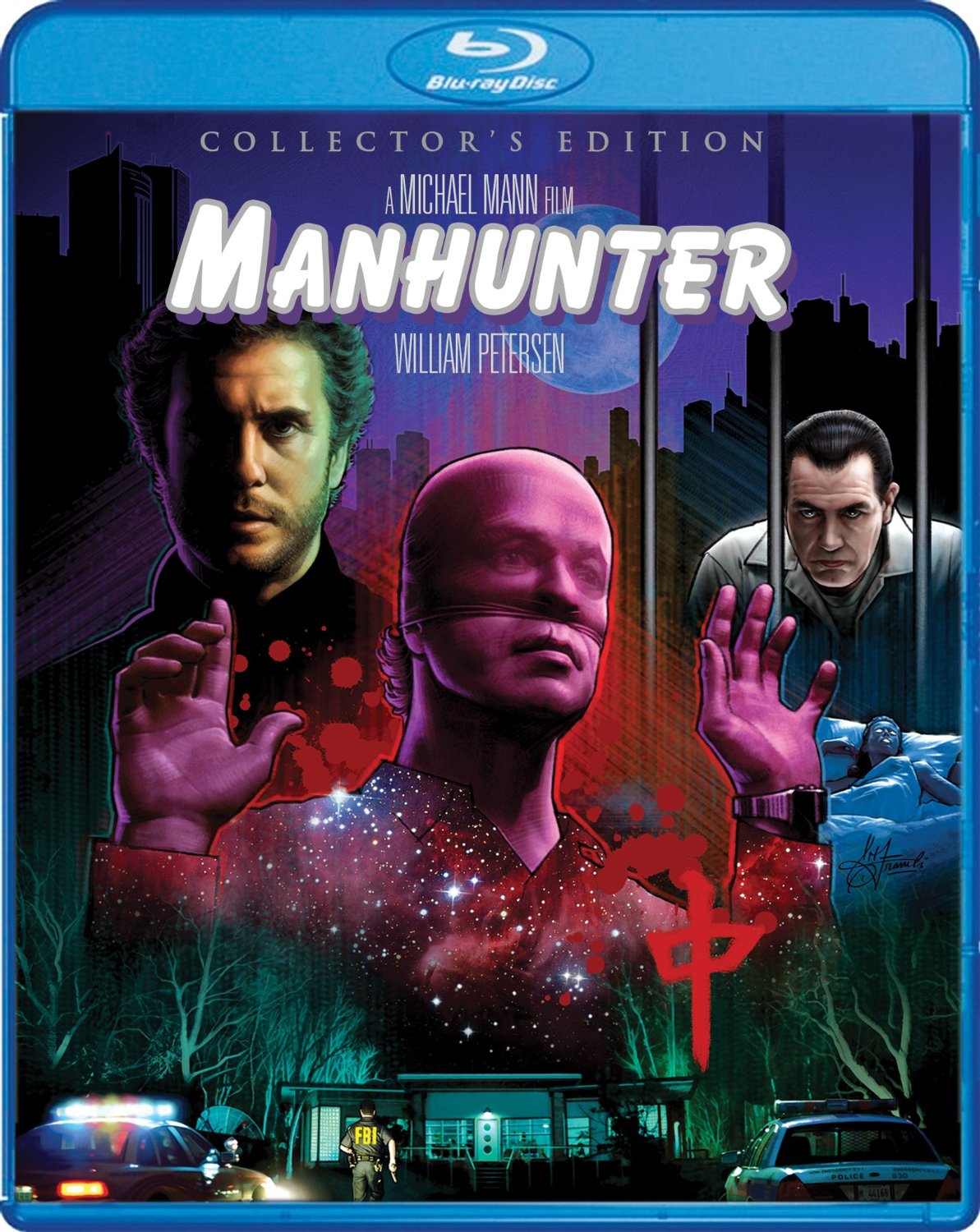 Before Silence of the Lambs; before the name Hannibal forevermore became synonymous with culture, cannibalism, intelligence, and bloodshed; before the excellent and killed off too soon TV show, and well before the unnecessary Brett Ratner helmed 2002 remake called Red Dragon, there was Manhunter. It was made in 1986 by Michael Mann and totally rocked that 80s Miami Vice look, sound, and feel that really introduced Mann to the masses. This was the world’s first introduction to one of cinema’s greatest villains, Dr. Hannibal “the Cannibal” Lecter (or Lecktor, as he is oddly credited here). And yes, this was before Anthony Hopkins took home the Oscar for playing this classy crazed killer. Some people claimed they can’t watch this Lecktor, played brilliantly but differently by Brian Cox, after having seen Hopkins do his Lecter thing. To those people I feel only pity, as this movie is a top notch suspense thriller, with a visual and audio identity all its own, great acting by all involved, amazing direction, and wonderful 80s-ness that I can’t get enough of. If you have already seen Manhunter, then you know this. Scream Factory has put out a beautiful Blu-ray for this movie, so you should go get it. If, for whatever the reason, you’ve missed out on this amazing film for all these years, keep reading.

You might have heard this story before: Will Graham is an ace FBI agent with a knack for capturing serial killers. But after collaring his last kook, the notorious Dr. Lecktor, he retired with barely his life, and sanity, intact. Well his old boss comes to him one day, asking his help in capturing a new murder machine, one that kills off whole families. Will reluctantly agrees and goes to talk to his “old friend,” the locked up Lecktor, for help and inspiration. Doing so is a bit of salt in the wound of Hannibal’s considerable ego, so the bad doctor sets things in motion to make sure the agent and the killer get that face-to-face meeting they both desire. To say anything more about the plot would be doing in a huge disservice, so I’m going to leave it at that and move on to some specific reasons you need to have this movie in your library.

First and foremost this is a Michael Mann movie through and through. From moving the action down south to his beloved Florida, to the awesomely 80s synth-pop soundtrack, to the use of color — if you are familiar with Mann’s work, you can identify this must-have flick as his at 1000 paces. Then there is the acting. Did you like William Petersen in the CSI TV show or To Live and Die in L.A.? You’ll love him here, as he’s at the top of this game in this film. Joan Allen has always been great in any film I’ve ever seen her in, and this one is no exception. She blends tough with vulnerable in such a believable way that few actors could ever hope to pull off. Do you like Tom Noonan in any of the dozen of creepy roles he’s done over the years? Well you have this movie to thank for making him so recognizable, marketable, and therefore hirable, and that is because he does his best acting (period) here as the monstrous and yet sympathetic Francis “the Red Dragon/Tooth Fairy” Dollarhyde. He plays one of the best big screen killers ever and is the star of the psycho show here as his Dollarhyde more than holds his own against the far more famous cannibal psychologist. As for Brian Cox as Lecktor, he is magnificent. Is he better than Anthony Hopkins? No, but he’s not any worse, either. He is a different kind of creature, entirely. He owns that role, makes it his own, and makes it completely terrifying just as Mads Mikkelsen would do many years later in the Hannibal TV series. He radiates his own brand of caged, but barely contained menace that is as creepy, chilling, and effective as any other version of Hannibal.

As for the special features on this new Blu-ray from Scream Factory, first and foremost, there are two versions of the film here. There’s the original theatrical version and the director’s cut. The director’s cut also comes with a commentary track by writer/director Michael Mann. You can also watch the director’s cut in standard non-HD definition if you’re feeling nostalgic. There is an interview with the first cinematic “Lecktor,” Brian Cox, that’s 40 minutes long. There is a making-of feature that comprises four interview featurettes with actors William Petersen, Joan Allen, Tom Noonan, and director of photography Dante Spinotti. All together they run over 92 minutes. There is an additional interview with cinematographer Dante Spinotti that runs 10 minutes, in case you didn’t get enough of him the first time. There is also another collection of vintage actor interviews with William Petersen, Joan Allen, Tom Noonan, and Brian Cox and that one is just 17 minutes long. There is a featurette on the awesomely 80s soundtrack that’s 42 minutes. A theatrical trailer and still gallery can also be found here.

Manhunter is a perfect time capsule movie as it is elegantly 80s. It is a portrait of Michael Mann the auteur, as it epitomizes the best of what made him, him. It looks wonderful, and with that amazing soundtrack, it sounds great. And being based off of Thomas Harris’ excellent book, Red Dragon (which in some ways I like even more than Silence of the Lambs), means the story is fast, action-packed, thrilling, and with twists and turns aplenty. And is remains so, even with Michael Mann tweaking it here and there to suit his aforementioned auteur needs. I cannot recommend Manhunter high enough. It is one of my all-time favorite films, and this new Blu-ray is just a thing of beauty. So yeah, this is a must have. Go get it.