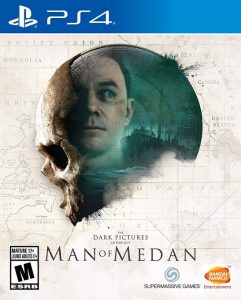 This is the first chapter of a proposed anthology of horror games, so if it sells well then there will be other chapters, each of them their own short horror story. On the surface I like that idea a lot; I also like that they are sold for much less than a full-blown game, as each chapter will likely be five to six hours in length, as this one is. Further, you can play this interactive horror movie by yourself, online with someone, or, and this really makes me happy, couch co-op. That means you can play with someone else in the same room as you, a nice feature that used to be common place in games but is now sadly rare. Here you can play with up to three different people, assigning all of the five characters in the story among the three people. This option is called Movie Night and I found it to be a lot of fun.

As for the story, an American warship in World War II encounters some weirdness on the high seas after taking on some mysterious cargo. The ship is lost, but cut to the modern day and a group of young people find the ship, still floating as a ghost ship. They go on board and soon spooky stuff starts to happen. And really, that is it. There is a pretty good mystery as to what the heck is going on, and as for the scares, they are a mix of atmosphere and jump scares. A lot of jump scares, but thankfully more of them land than miss. There is a spooky British guy (they make the best spooky guys) playing as a sort of Crypt Keeper who pops up every once in a while to sum up the story thus far and and try to lay down the spooky dread for what’s about to come.

This game can be a bit cornball at times, but so can a lot of good and fun horror movies. That’s not too surprising, as horror filmmaker Larry Fessenden supplies the screenplay here. Man of Medan is essentially a series of QTEs (Quick Time Events), but like the scares in this game, they work more times than not. I did like the previously mentioned Until Dawn and I liked this game too. It is quick and to the point, it doesn’t outstay its welcome, and I am glad for that. Horror fans should definitely give this one a shot, so consider it well recommended.