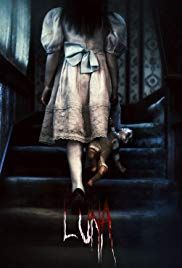 Seconds into the film, we’re rendered helpless as a couple huddles on the couch, sobbing while a young boy sits absent-mindedly on the chair beside them. It’s as if we’ve stumbled into a funeral, unannounced, and we don’t belong. Before we get our bearings, the Ringu-esque ghost at the heart of the story wastes no time tormenting the boy and providing a jump scare that damn well got me (and never mind the literal goosebumps it later provides).

Writer/director/editor Ross Williams assumes his fans are not of the lowest common denominator. He expects you to pay attention and think for yourself. Watch while distracted and you risk missing out on some of the finer details which contribute to the overall story. The cerebral approach has a positive effect on the re-watchability of the movie and, combined with strategic camera angles, provides first-person views of the action. We’re given the sense of being inside the haunted boy’s head seeing what he’s seeing, fearing what he’s fearing. A pitch-perfect score ties it all together to not only enhance our experience, but to downright entwine us in it.

Despite its short-lived running time of under eleven minutes, LUNA leaves much on the table to dissect and discuss long after the final credits stop rolling. As such, saying much more may rob you of your own surprises. I will say, however, for those who feel endings are the most important part, you will not be disappointed. The cast and crew deliver on all factors of creepiness and suspense until capping it off with such an unexpected WTF twist, you won’t know whether to sit back and ponder, or watch it all over again. On second thought, hold my beer. I’m going back in.