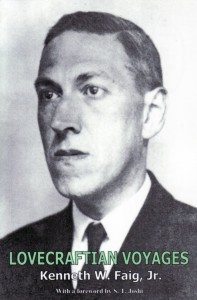 In 1973, plans were made to publish a collection of essays by noted Lovecraft scholar Kenneth W. Faig, Jr., the man credited with transforming research on Lovecraft and his circle from a haphazard collection of amateurs into a literary discipline unto itself. The publication never materialized, and Faig’s manuscript became the holy grail of scholarship, difficult to consult because of its limited distribution, but well worth the quest. Early scholarship relied on Faig’s holistic approach of treating bibliographic, genealogical, biographic, and epistolary material interchangeably to understand the full picture of Lovecraft as a man and as a writer. Faig’s fabled manuscript was the foundation to begin future research. One need go no further than de Camp’s 1975 biography of Lovecraft to see Faig’s presence already influencing future research.

The book is the eclectic mix expected of a man who is equally at home discussing Lovecraft’s annual income as he is pondering proper pronunciation of Cthulhu. This is not a book for everyone. If you have little interest in the industries Whipple Phillips was involved with, or the pseudonyms Lovecraft concocted to mask his prolific contributions to amateur journalism, this is not a book you find interesting. But if you are a interested in the external influences of Lovecraft’s life and how they shaped his career, Faig’s research remains the gold standard; the majority of the material is as fascinating, relevant, and valuable as when it was pulled from a typewriter in the early 1970s.