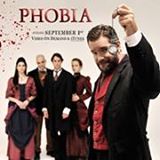 Set in 1885, Dr. Lesley Parker (Leerhsen) has gained entry to a revolutionary Parisian medical school teaching hypnosis. With Paris plagued by a blood thirsty serial killer, and Lesley preparing to return to San Francisco to open her own psychiatric practice, she is introduced to Val Drakul (Jeffery), a young Romanian man haunted by his family’s tragic past. At the urging of her colleague Sigmund Freud, and accompanied by Val’s cousin Guy (Brooks), Lesley brings him back to San Francisco making him part of a select group of patients all suffering from phobias. But when the patients start dying one by one, and a stranger named I.M. Casey (Tompkins) arrives believing the Parisian serial killer is among them, everyone points their finger at Val – who may or may not be a vampire.