Lords of the Earth: A Kaiju Novel by David Bowles – Book Review 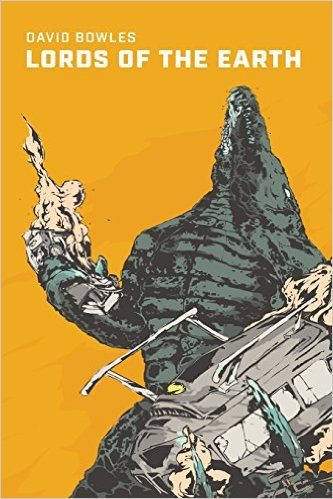 Of monsters in the horror genre, they are many and diverse. Vampires, werewolves, and zombies—so many zombies—as well as other creatures of a cryptid nature such as chupacabra, the Jersey Devil, Sasquatch, and the like. And they’ve all been taken on and handled quite astutely by some of the best authors in the business over the years, from Stephen King and Robert R. McCammon to more recent authors such as Jonathan Janz and the monster man himself, Hunter Shea. But in the vast lexicon of great monster fiction, one of which we’re notably lacking in is, and has always been, kaiju. Those Sunday matinee beasts of yore have been visited in horror fiction frequently in recent years but seldom has it been done with any major level of alacrity. But there have been a spare few authors who have taken on the theme with impressive results. Jeremy Robinson comes to mind, as does Steve Alten. And now, with Lords of the Earth: A Kaiju Novel, we can add author David Bowles to that exclusive list.

One of the problems I always have with stories like this is in suspending my disbelief. It’s difficult to tell a story about gigantic, city-smashing monsters rampaging across the country and make it somehow believable, or at least enough so that the reader is willing to take a chance on it. In the case of Lords of the Earth, David Bowles has managed to establish a viable premise, wisely doing so within the very first three pages of the short prologue, presenting us with the first monster and establishing the beginnings of an origin story very early on. He also draws us quickly into the substance of the story, introducing his characters in rapid-fire succession and throwing them into chaotic pandemonium right from the start, giving us a wild thrill-ride of a story that is just this side of impossible to put down.

Lords of the Earth is told from the viewpoints of four main characters, three of whom are playing out their stories in the current day and one whose story takes place in 1938 and, while this might sound like it could get out of control or, at the very least, awkward, David Bowles handles it with remarkable deftness, delivering his story with a smooth fluidity, using the switches between voices to help control pacing and story flow. And it doesn’t take long to see why this story succeeds as well as it does. Bowles develops his cast members so amazingly well it’s almost uncanny. A lesser author might have taken the entire length of this book to develop even one character so strongly let alone four, but David does it in a mere hundred-fifty words, creating a group of individuals that are fully formed and sympathetic, keeping his reader invested in their fates throughout, and caring about the eventual outcome all the more because of it. He’s an obvious student of human nature and it shows in this work as his characters respond to different situations in natural and believable ways, lending that much more veracity to a premise that might border on absurdity were it not for the people who hold it up.

I’ve had the opportunity to read the work of several extremely talented Latino authors this year, including Gabino Iglesias, Silvia Moreno-Garcia, and the uber-talented poet Edward Vidaurre, and I’ve been hugely impressed with all of their work and feel lucky to have had the chance to experience them. They all bring a level of depth and authenticity of emotion to their writings that is often lacking in genre fiction and poetry, and that adds to the overall satisfaction and enjoyment of their books and poems. And now I can add Mexican-American author David Bowles to that group of exceptional individuals and to my queue of must-read authors. Lords of the Earth is a breath-taking, pulse-pounding story with a high body count and an intensely human element that’s perfect for a lazy rainy day next to the heater or fireplace, maybe paired with a warm brandy or neat scotch added for a finishing touch. It’s a masterful blend of science and South American myth and mysticism that sounds outlandish in premise but is so perfectly well executed you won’t want to put it down once you start reading. David Bowles is an author I’ll be keeping an eye on and I strongly recommend that you do so too.