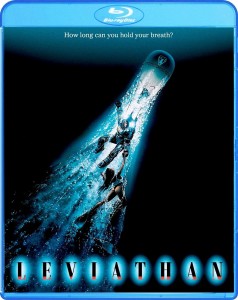 1989 was the year of underwater adventure, thrills, and frights. Three movies came out to theaters that year, all looking to become king of the cinematic sea. The Abyss was the undisputed leader of that submersible subgenre because it had the huge budget and big names (Ed Harris, Mary Elizabeth Mastrantonio, and most importantly, director James Cameron) to make that happen. That left two ocean-set creature features to battle it out for the number two spot. One was Deep Star Six, which is a boring mess of a movie, and the other was Leviathan, which is far and away the better of the two films. Sadly, it only did okay at the box-office and has largely been forgotten by horror fans today. Is that for the best, or should Leviathan be brought back up to the surface for a closer look? Well Scream Factory has done exactly that with a new Blu-ray release of the movie, but should you get it? So grab a scuba tank, and maybe even a rubber ducky, we’re going to take the plunge with Leviathan.

Far below the ocean’s surface, there is a mining station manned by a small group of memorable, if not oddball, blue collar types. In doing their duties, they come across a sunken Soviet ship, and one of the crew snags the safe looking for treasures. It soon becomes apparent that the Russians sunk their own boat on purpose, and that the reason for that scuttling is not completely dead. No it’s not some deep sea devil-fish, it is far more horrifying, insidious, and John Carpenter’s The Thing–like then that. In fact, this movie owes more than a tip of the hat to Carpenter’s creepy classic, not to mention a how-you-do to Ridley Scott’s Alien.

Before you can say “holy Lovecraftian horror, Batman” people are changing and merging into a freaky (and fishy) conglomerate beast hell bent on eating, and joining with, everyone in the underwater base. It is up to our hardworking heroes to find a way out of their deep sea doom, but with Robocop, a ghostbuster, and the guy who trained Rambo on the side of the humans, I’m sure everything will be okay.

Leviathan is a pretty standard creature feature, but it does have some strengths going for it that makes it stand out from the heard. Or would that be school? You know, like fishes? Oh, never mind. First and foremost, unlike Deep Star Six, this movie isn’t god-awful boring. It doesn’t waste time and it gets to the heart of the matter and then runs with it until the end. Next, there is some good, creepy moments to be found in here as the retrograde virus that’s turning people into misshapen, tentacle-sprouting horrors, spreads. And then there’s the monster itself. While not on the same level of anything that appeared in The Thing, there is more than a passing resemblance with that critter, and I liked that a lot. Lastly, this is just a competently made movie, which again is something Deep Star Sux wasn’t. While it is a silly monster movie, none of the actors treat it as such, and the direction by George P. Cosmatos is as good here as it is on any of his more prestigious, bigger-budgeted movies like the Stallone one-two punch of Rambo: First Blood Part II and Cobra. And yes, I do love both of those movies, thank you very much.

On to the special features on this new Blu-ray from Scream Factory. While there’s not a ton of goodies to be found here, it’s far from barebones too. There is a behind the scenes retrospective that runs over 40 minutes and a pair of interviews. There is one with Hector Elizondo that’s 12 minutes long and another interview with Ernie Hudson that’s runs 15 minutes. A theatrical trailer brings this catch of extras to a close.

Leviathan is a mighty fun monster movie, and nothing else, but that is enough for me. The creature is imaginative and truly frightening, the actors are entertaining to watch, the direction is solid, and the story moves and at times even chills. If that sounds like a good time for you, and it really should, then get the new Leviathan Blu-ray when it comes out August 19th