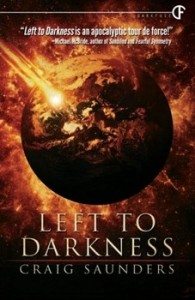 There’s a lot going on in Craig Saunders new novel Left To Darkness, a story of the days leading up to and following the apocalypse. Sometimes, in fact, there’s too much going on with a large cast of characters that forces the narrative to jump around to make sure all of the plot points are covered. The prose is swift and keeps the reader intrigued even through the less interesting characters and the weaker plot points.

The book is divided into two parts as far as the general plot goes: the pre-apocalypse and the immediate post-apocalypse. The story begins with the world knowing that a meteor of gigantic size is going to strike the Earth, but nobody is sure what will follow. The questions of immediate death of everyone or a more localized sort of devastation or a slow, suffocating death plague the characters as they try best to prepare for the inevitable. Up until the point of the meteor’s impact the book is at its best.

The reader is introduced to James Finley, a homeless man with a mysterious briefcase and Ed Bright, a powerful man with a vested interest in finding that briefcase. Dawn Graves is on the brink of motherhood as the world is on the brink of devastation. Some of the most insightful moments in the book come from Dawn as she ponders motherhood and all of its attendant issues. What will it mean to bring new life into the world if all life is threatened. Paul Deacon is a dedicated police Inspector who is trying to do his job as London goes mad around him, seemingly destroying itself before the meteor can. As the story works its way into the meteor strike and the aftermath, Paul faces an interesting challenge straight out of The Day of the Triffids.

Unfortunately, once the meteor strikes the story slows down substantially. What was more philosophical and unique becomes a more standard story of the apocalypse, one complicated by too many characters. While Dawn Graves continues to be interesting throughout, other characters become a drag on the story. Too much of the focus falls on the non-human, or more monstrous, characters in the novel. There are “crowned kings” who gather in the thousands to watch a deformed and hideous man who leads them in a strange cannibalistic ritual with some weird parallels the Catholic transubstantiation. The characters fight their way through a strange new world toward a gathering that sets the stage for an unfortunately mediocre finale. Left To Darkness is billed as “The Oblivion Series Book 1” and the ending is a clear set-up for another installment in the series.

The only real constant in the novel is the occasional appearance of a naked man smoking a cigarette. He pops up at odd times to direct characters and bestow gifts upon those who are chosen. This is a interesting plot device that will no doubt recur in the next book in the series and then, hopefully, tie the story together better and make for a more complete, consistent novel.