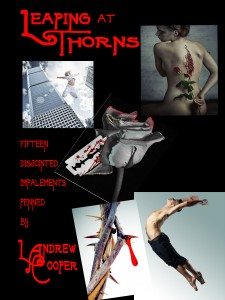 No, these are not the names of Calvin Klein colognes; they’re the sections (or triptychs) that divvy up author L. Andrew Cooper’s latest collection of weird fiction, Leaping at Thorns.

The fifteen short stories featured in this collection touch upon the above mentioned themes in one way or another. Some stories take the themes literally, like the first tale to open the book (and the ‘complicity’ triptych): “Charlie Mirren and His Mother.” Without giving the good stuff away, this piece of short fiction brings the carnage early on all while pushing the relationship between a son and his mother to its breaking point.

Then there’s stories like “Last Move” from the ‘entrapment’ triptych. A mother and son plan a cross-country move only to wind up with a haunted moving truck. Don’t you just hate it when that happens? The ‘entrapment’ theme isn’t overly literal in this story; it could very well reflect the mother and son’s life previous to their fresh start, and then that haunted U-Haul comes in and screws everything up.

There’s a wide variety of situations that happen throughout the book’s pages, yet it seems that relationships are at the heart of every story. Be it the bond between mother and son like in the aforementioned tales, “Charlie Mirren and His Mother” and “Last Move”; the ties of friendships, in “Hands” and “Plague Veronica”; or even the relationship between body and mind, like in “Zero Patients” and “Carriers.”

Some of the stories even share characters, while others share monsters. Fans of Cooper’s previous novels, Descending Lines and Burning the Middle Ground, will see the name Dr. Allen Fincher pop up several times in Leaping at Thorns, a nod to the nefarious doctor and his mal-intent.

A few stand-outs in the collection include: “Worm Would,” in which the main character has a bad case of…worms; “Complicity” (which is actually in the ‘conspiracy’ triptych), a story that tackles a couple’s financial woes (and doubles as a view on our society – a world under the influence of the almighty dollar); and “Charlie Mirren and his Mother.”

Fiction collections are great because they give authors a chance to show off some serious short story skills – and Cooper’s are here on full display. Pick up Leaping at Thorns if you like a little diversity in your horror, from thought-provoking stories to down-right creepy tales.