LEADERS OF THE PACK – Book Review 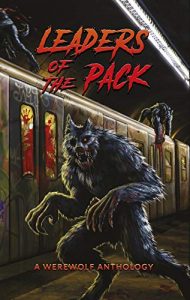 I have been thinking about werewolves lately.

Thus, I felt fortune smiling upon me when I was asked to review Leaders of the Pack, as I hoped it would provide me with additional food for thought. I got what I hoped for in more ways than one.

As a lover of creature features, I was pleased that the werewolves in the collection were beastly. They were monstrous. They were not taking off their shirts and displaying tribal tattoos in order to woo young maidens (cough, Twilight, cough). Once shirts were ripped off in Leaders of the Pack, the accompanying drooling was not linked to lust, but to a carnal, rapacious hunger. Most characters in Leaders of the Pack do not survive their werewolf encounters, and that is exactly how I like it.

Each story is prefaced with an engaging illustration by Michelle Merlini. These images offer a visual appetizer for the main dish that follows.

The stories encompass a wide range of time periods and settings. Each werewolf story is different from the last, and there were some new twists on the ancient monster story.  The writing styles showed variety and skill.

I do have two very, very minor complaints about the anthology. First, some stories were excerpts or prequels. While able to stand alone, I felt like maybe I was missing out on a larger picture. Are there not enough quality werewolf short stories to fill an anthology? Second, and this leads back to the thinking I’ve been doing about werewolves: where were my sister writers? While some stories had female main characters (Jonathan Janz and Graeme Reynolds each told clever tales with #metoo and feminist elements) there was not a single woman writer (or, according to the pronouns in the bios, anyone who identified as female). I believe that anthologies should showcase the best stories imaginable, yet I can’t help but question why women aren’t writing and submitting excellent werewolf stories.

Leaders of the Pack is a gory, thrilling read. If, like me, you like your monsters monstrous, you are in for a treat.