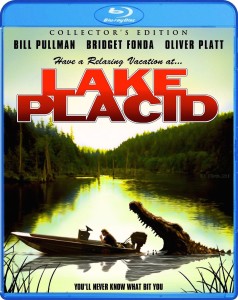 The unstoppable machine that is Scream Factory strikes again with one of the best, and most fun, ‘when huge animals attack’ movies from the 1990s. It’s Lake Placid, written by TV’s super scribe David E. Kelley, and directed by Steve Miner, who is no novice at the horror movie making game, having helmed two of the better Friday the 13th flicks (parts 2 & 3) not to mention 1986’s House and 1989’s Warlock. Not enough talent for you? Well then, let’s look at the cast, which includes Bridget Fonda, Bill Pullman, Oliver Platt, Brendan Gleeson, Betty White, and more. What, you still want more reasons to get this new Blu-ray? Okay, keep reading, but if you know what’s good for you, you’ll stay out of the water.

So there’s a like in Maine with a huge, man-eating beast in it. No, this isn’t a Stephen King story, and this beast is of the natural kind, even if it’s unnaturally huge. It’s a crocodile, a 50 foot long crocodile, and it’s very hungry. After munching a scuba diver, the local sheriff, played to hilarious effect by Brendan Gleeson, calls in the experts to check things out, because he thinks the man-killer is a bear. Yes, an underwater grizzly, apparently. Enter Bill Pullman as the local fish and game guy, Bridget Fonda as an out of her element museum expert, and Oliver Platt (who is also aces in this) as a wealthy eccentric who gets his rocks off by studying, and swimming with, crocs. This quirky quartet, and about a half dozen disposable extras, soon do the Jaws thing, only with a smaller body of water, but a much bigger eating machine.

Now Lake Placid is no Jaws, but is an immensely entertaining, sometimes scary, and often funny film. It walks that tightrope better laughs and shocks, and does so masterfully. As I hinted at in the intro of this review, the 1990s were full of big animals attack flicks, and this one is by far the best written, directed, acted, and all around made out of all of them. Even the CGI isn’t as offensively bad as say Anaconda from just two years prior.  This film is fun from start to finish, and it never misses a step. There’s not much more to say about it other than that.

But I can talk about the extras on the new Blu-ray from Scream Factory. This release comes with a brand new making of/retrospective with actor Bill Pullman, director Steve Miner, and cinematographer Daryn Okada, that runs about 23 minutes long. There is a short (5 min.) press release video and about 7 minutes of croc test footage taken back in 1998. The usual theatrical trailer, a collection of TV spots, and a behind the scenes photo gallery are also on this disc.

Lake Placid is a movie that’s as funny as it is frightening. While it was made in 1999, it seems like a throwback to the 1980s when horror movies could still be fun, and for that, I love it. The fact that it has snappy dialog, great characters brought to life by amazing actors, and the whole thing is ably directed by man with years combining humor with horror, is the cherry on top of this wonderful film. This is a nature runs amok movie that should not be missed. Get your copy when it comes out July 8th, because this one is highly recommended.