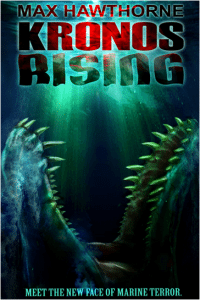 Two of my favorite things in the world are horror and the sea. Both hold endless fascination for me, and they also occupy much of my thoughts these days; it seems the older I get, the more I want to focus on both for some reason. So I’m sure it’s no surprise to discover I love horror movies and books that deal with the ocean. Deepstar Six, Leviathan, and Jaws are some of my favorite horror flicks, while Meg by Steve Alten and Dagon by H. P. Lovecraft are two of my favorite written works. I’m very proud to add Kronos Rising to that elite list of favorites. Author Max Hawthorne serves up bucketfuls of horror in this terrifying tale, and I can guarantee it will keep people out of the water for a long time to come!

If you are not familiar with Kronos Rising, here is the plot synopsis courtesy of Far From the Tree Press:

Devastated by his wife’s tragic drowning, Olympic hopeful Jake Braddock turns his back on fame and fortune and retreats to his childhood home of Paradise Cove, Florida. He accepts the job of town sheriff, hoping to find the solace he so desperately craves.

He finds anything but.

A series of horrifying deaths and disappearances send a flood of panic through the idyllic town. It is only after the ravaged carcass of a full-grown whale surfaces, however, that the real terror begins.

Soon Jake finds himself drawn into an ancient mystery – a mystery that ends with him adrift at sea, battling for survival against the deadliest predator the world has ever seen. It is a creature whose ancestors ruled the prehistoric seas. Now freed after eons of imprisonment, it has risen to reclaim the oceans of the world as its own.

Sea monsters have been a part of our culture for as long as history has been recorded. They are therefore, in part, responsible for the deeply rooted fear many people share of the water. As such, these beasts haunt our psyches, whether we are willing to admit it or not. This innate primal fear is drawn out in full with Hawthorne’s book, which makes it a powerful read on several levels.

Kronos Rising is written very well, in the manner of a veteran writer who knows how to weave a mesmerizing story. The wording appears carefully chosen, and each sentence blends with the next like an intricate design on an ornate tapestry. This allows the story to flow quickly and smoothly, which in turn makes the 500+ pages fly by. I was finished with the book before I even realized it.

The characters are well thought out and believable, damaged individuals with personalities many of us can relate to on various levels. Jake and Amara both carry old wounds, both mental and physical, which makes the reader care about them. On the other side, the villains (aside from the creature) are devious and self-centered, obsessed individuals who focus more on personal gain rather than what’s right versus wrong. So in addition to the man-versus-nature dynamic, the reader also gets a nice dose of good-versus-evil. I like this combination, as it gives several focal points to the story.

Kronos Rising has plenty of action and some downright terrifying scenes. I can’t even count how many times people wind up staring at the creature’s massive jaws as they are about to crunch down on them. And every time, I inwardly cringed. As much as I love to be on or under the water, I have to confess this possibility (being eaten alive by a sea predator) is always in the back of my mind. As unlikely as it is, the thought of it makes me shudder. Thus, each scene of these scenes in the book elicits a powerful emotion for me.

With heart-stopping intensity and insane action that will leave you begging for air, Kronos Rising is a major win for me. I recommend this to anyone and everyone looking for a good read. Hawthorne is a major talent, and I cannot wait to see what he does next. In the meantime, pick up a copy of Kronos Rising today; you won’t be disappointed. It is available now in a variety of formats.