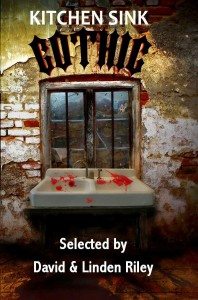 In Kitchen Sink Gothic, David and Linden Riley have put together a dark and gritty horror- and humor-filled anthology which was an absolute blast to read. In its pages there are 17 stories with a Gothic tint to them which focus primarily on the working class. It is a twisted mix of tales that if you were to read the descriptions one by one wouldn’t seem to fit together and yet the Riley’s have proven they know exactly which story works with the next.

While not every story is a gem, there isn’t a single failure in this book that makes me feel any of my time was wasted. As long as you’re in the mood for the strange and insane, that is.

An interesting line up with some names you’ll probably recognize if you read a lot of horror and speculative fiction as well as some that you won’t. The table of contents includes:

“Daddy Giggles” by Stephen Bacon, “1964” by Franklin Marsh, “Derek and the Sun-Spots” by Andrew Darlington, “Black Sheep” by Gary Fry, “Jamal Comes Home” by Benedict J. Jones, “Waiting” by Kate Farrell, “Lilly Finds a Place to Stay” by Charles Black, “The Mutant’s Cry” by David A. Sutton, “The Sanitation Solution” by Walter Gascoigne, “Up and Out of Here” by Mark Patrick Lynch, “Late Shift” by Adrian Cole, “The Great Estate” by Shaun Avery, “Nine Tenths” by Jay Eales, “Envelopes” by Craig Herbertson, “Tunnel Vision” by Tim Major, “Life is Precious” by M. J. Wesolowski, and closes out with “Canvey Island Baby” by David Turnbull.

The more interesting reads for me included “Lilly Finds a New Place to Stay” which revolves around Lilly….finding a new place to stay. Only, things aren’t ever quite that simple now are they? Next up is “The Sanitation Solution” where one man’s bitter war with his ex makes for quite the disgusting read. Finally, in “Envelopes” we’re given a different look into the world of the occult.

Honestly as I said above there isn’t a beat missed in these tales and while a couple might be slow, none are bad.
My only regret is that I didn’t have a chance in my all too backed up pile of books to read this anthology sooner!