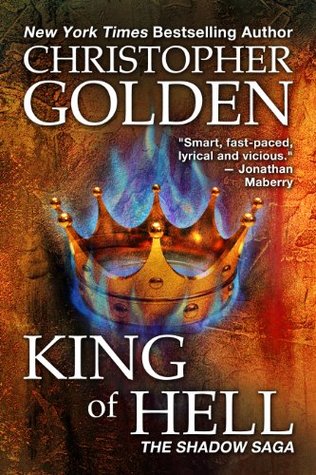 When author Charlaine Harris blurbs your new novel it is no small event. Her statement on Christopher Golden’s THE SHADOW SAGA: “I was amazed how many elements now familiar in the vampire and thriller genres appeared in OF SAINTS AND SHADOWS first.”

I have read all the novels in Golden’s stellar SHADOW SAGA and have encouraged like-minded friends to pick up what may very well be the best modern vampire series in the business. With six previous novels in this stellar series preceding it, KING OF HELL had big shoes to fill. It is highly recommended that you have read the earlier novel to have a working knowledge of the plot and characters.

The protagonist of these novels is vampire Peter Octavian. In prior novels in the series, he had to make a risky choice to save his realm from the hordes of demons sent from hell to vanquish his kind. Regrettably, Octavian’s choice to summon Gaea to rid Earth of these demons saw most of his kind – as well as all of his closest friends and ‘family’ – vanquished to Hell.

Now, in what reads like an unearthly sort of Fellowship Of the Ring quest – Octavian is joined by a wise-cracking hobgoblin named Squire (who reminded me a lot of Rocket Raccoon from The Guardians Of the Galaxy) and a demon-boy named Danny into Hell itself in an attempt to rescue his vampire legion that had fought by his side for many, many years. Octavian briefly reflects on his own “making,” when Karl von Reinman offered him the power to kill as many Turks as he could in an ancient battle – a power that would make him immortal.

Octavian, who is quite weary from the centuries of battles, needs to muster up all his strength to rectify the event that the vampire community is referring to as “the vanishing” or “the excommunication.” The trek that our three characters take really picks up once they enter Hell itself. They are a formidable trio – but are they equal to the evil that they are completely unaware of? An evil that holds not only Octavian’s kind but also his beloved sister, Alexandra Nueva? However, Octavian is himself a force to be reckoned with and even his new colleagues failed to realize that he was actually Orias, son of Oriax, a demon whose reputation precedes him.

KING OF HELL is an outstanding read and the depiction of Hell is enough to make Dante himself blush. Originally released in 2014, I hope this version intrigues new fans enough to go back and engulf themselves in the entire SHADOW SAGA.