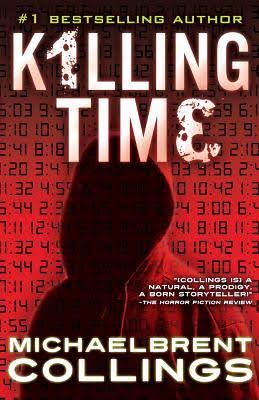 When my son said that he would be refurbishing and reprinting some earlier works, I figured that I wouldn’t be seeing anything new for a while. When he showed me the re-designed cover for Killing Time, it struck me as ideal for the title, but I couldn’t for the life of me remember what the book was about…a not entirely unwarranted lapse since I’m seventy and he has written somewhere around fifty novels.

As we spoke about it, I realized that somehow this one had slipped through the cracks and that I had in fact not read it.

So I ordered it through Kindle and began.

The first word—“SCREAMS”—hooked me, and the fourth paragraph set the hook with what could only be described as an epic simile: “Like images of the victims of Hiroshima burnt onto walls as they vaporized, empty reminders of once-life that served only to highlight surrounding death.” And abruptly the story of a woman enmeshed in terrors took on the weight and solemnity of a nuclear blast.

Susan Norton has returned home, walking through a “strange night, a dark night, a haunted night,” only to suffer a series of frightening practical jokes by her new husband, John Fung, each recounted through Michaelbrent’s meticulous handling of detail and slowing of time until the suspense becomes unbearable for Susan, and for readers.
As the night deepens, she hears a sound that winds her terror to new heights: “Tick-tock, tick-tock, tick-tock.” Searching for the source, she sees a beautiful clock, one she has never seen before.

Inexorably, the tick-tock turns to chimes as the mysterious clock counts down the final minutes to midnight. On the third ting,

Darkness swallowed the house whole, with her inside it, as though she were in the belly of a fish that had been swallowed in turn by a larger fish, a leviathan of the deep that would drag her down to the abysses, the deepest parts of the ocean where the pressure alone would destroy her.

Another carefully wrought simile that perfectly captures Susan’s increasing sense of dread, yet which contains as well a core of meaning that only becomes apparent as the novel progresses.

On the twelfth, the screams began.

The remainder of Killing Time is a literal race against time as first Susan Norton and then Kristen Ames become enmeshed in the consequences of an eighteen-year-old crime. More clocks appear and disappear; more chimes count down to midnight; and more people die…horrendous, tortuous deaths, all the worse for being seemingly random and ultimately inexplicable. And yet with each death, it becomes clear that each is somehow connected to the others, and that only Kristen has the key—literally and figuratively—to full understanding.
Killing Time is a carefully paced combination of murder mystery, ghost story, and Gothic tale of old sins and new retribution. With each new complication it seems as if the whole truth has been revealed…until the next page thrusts all assumptions into doubt. Eight pages from the end, the solution seems clear; two pages later, and everything must be re-examined, a new resolution adduced. Another two pages, another inversion. Until literally the last line, in which truth is final and the entire novel must be re-imagined.

From first word to last, there is no let-up in the tension or the terror.

Wide-ranging readers of horror may distinguish deliciously subtle echoes of other works, such as the mysteriously appearing doll in Dean Koontz’s Tick-Tock or the tone of unrelenting horror that concludes Stephen King’s Pet Sematary. But there is no mere imitation here; Michaelbrent has welded these and other resources into a coherent, integral narrative that moves flawlessly through time and space until the final clock shows midnight…and the final screams that will never end.