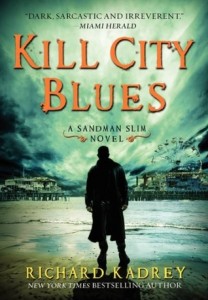 For some reason, I’ve reviewed several selections for Hellnotes where the book in question was not the first in the series. I chalk that up to my being late for the party.  In this case, the enormous party of people that are already fans of Richard Kadrey and his protagonist, James “Sandman Slim” Stark.  (He’s nothing like Iron Man. Well… maybe a little.)

If anyone is deserving of a party, it’s Kadrey.

Kill City Blues is a tough, in your face thrill ride through crime-ridden L.A. and Hell.  Wait… did I repeat myself?

Kadrey manages to create in Slim the kind of character I love to read about: edgy, full of snide quips, protective of his loved ones, and willing to destroy anyone that endangers them. It’s apparent in Kill City that Slim has been through his own literal and figurative Hell already.  And during the read I was given just enough information on what occurred in the previous books to stay with the current story, but not so much that I didn’t want to go back and read the other novels.

Slim is powerful, but he has his limits, which is the mark of a believable hero. There are a few times where he’s just out of juice and can’t magic his way out of a tight spot. Good thing he’s got some talented friends and frenemies.

Kill City doesn’t get too bogged down in description. It’s there, but interspersed with action that keeps the plot moving. There’s an initial quest that starts the book, then subplots are woven in with such skill that you almost can’t tell where they began. One thing I didn’t like was that the book isn’t separated into chapters. With the action that occurred, I would have liked to have that hard scene break.

Slim reminds me of another main character in a dark fantasy story I recently read for Hellnotes, The Devil’s Hand. But that will be my next review.

I liked that Kadrey doesn’t have a problem with hurting his characters and putting them through it. Some authors tend to create nursery rhyme problems for their characters the deal with and the reader doesn’t get the sense that the character is ever really in danger. Not so with Slim or he members of his crew. They are thrown into some entanglements where you wonder how they will escape.  And no one makes it to the end of the novel unscathed.

Which made me enjoy it all the more.  When you have a tightly knit crew, as in this novel, if something happens to one member, it affects all. Kadrey isn’t afraid to show this in his novel.

I recommend you pick up a copy of Kill City Blues or better yet, the first in the series, Sandman Slim. I’m certainly going to.