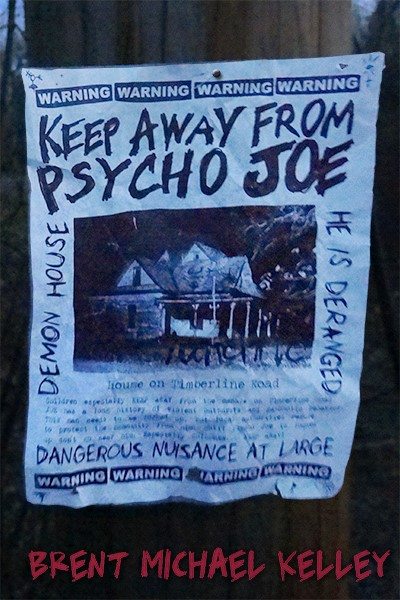 Brent Michael Kelley is a recent discovery for me. Author of the fantasy/horror series, “Mischief Mayhem Want and Woe,” he’s been around for a while and he’s garnered some high praise for those books from readers and critics alike. But I didn’t pick him up on my radar until Omnium Gatherum editor Kate Jonez sent out an email about the release of Kelley’s newest book, Keep Away From Psycho Joe, and I can honestly say I’m glad that this book is my first foray into his body of work.

Keep Away From Psycho Joe tells the story of Ruby Thomas and his friends Byron Cludeski — Cludes — and Cludes’ cousin Justine as they try to solve the mystery of Ruby’s closest neighbor, Psycho Joe, an enigmatic and dangerous-seeming man with dark, complex secrets and a desire to be left alone. But there’s more to Joe’s secrets than what is readily apparent and as the story progresses, the twists and surprises become increasingly more terrifying until the three hapless teenagers find that they may be in way more peril than anyone realizes.

This book has so much going for it that it’s difficult to figure out what to talk about and what to let you discover for yourself. The dialogue is natural and fluid, the witty banter between the characters is both engaging and frequently hilarious, and the settings are perfect for the story, as dark and brooding as November days, and often as ominous and threatening as Psycho Joe himself. It also has a great storyline, unique in premise and masterful in execution, keeping you a willing prisoner from the very first word to the final heartrending sentence. But while all those things contribute to help deliver a great, entertaining read, they are not the glue that holds it together. That honor goes first and foremost to Kelley’s exceptional character development. He has an obvious love of people and it shines through in his cast, particularly in the affable, sarcastic and immensely endearing personage of our protagonist, Ruby Thomas. Through the use of backstory, dialogue, and action, we come to know him intimately and to deeply care about him as we follow in his and Cludes’ antics, and share in the suspense and ultimate terror that the three teen characters are eventually presented with.

Next up after character, in order of importance to this story, is the frequent moments of laugh out hilarity, sometimes stretching on for page after page as Ruby makes entries in a notebook he has entitled “the Encyclopedia Stupidica,” a parody of a history book made for the sole purpose of irritating the teacher that got him kicked out of school. While it would be remiss of me to reveal too much of that, here is just a small sampling to give you an idea of the hilariousness that runs through this thing:

France
France was named for David France, a German sailor of absolutely no significance. He was killed during the invasion of Normandy by Japanese forces and went forgotten until 1991 when he was mentioned in a George Carlin HBO special. Upon seeing the George Carlin special, Napoleon Bonaparte declared France would now be known as France and invaded Russia. Later, in 1936, England sent all their convicts to colonize France. That’s why to this day France is populated with criminals and Wheel of Fortune fanatics. The only reason France still exists is because no one will tell the Russians where it is.
Galileo
Galileo was the inventor of the telescope and the microwaveable bread pocket. One of his inventions is all but forgotten, the other is enjoyed by millions of hungry people daily. Galileo was born in 1736, and he died in 1733 at the age of 107. He led a strange life with many secrets.

Brent Michael Kelley has a voice all his own and an extremely healthy imagination with which to bolster it up, captivating his reader with his often poetic, engaging prose, natural flowing dialogue, and perfectly timed pacing, never letting up but never losing sight of the overall story. Keep Away From Psycho Joe is an endearing, well told horror story with a terrifying premise that becomes more and more insidious with every turn of the page and will leave you breathless and wanting more by the time you reach the conclusion. And it’s a good thing it leaves you that way because it’s the first in a series and there’s a pretty major cliffhanger at the end. Overall, it’s an intelligent coming-of-age horror story that’s billed as YA, but will hold its own with most horror audiences regardless of age.

If you’re looking for a fast, entertaining and expertly told story to read on a gloomy fall night, Keep Away From Psycho Joe is more than worth the price of admission.