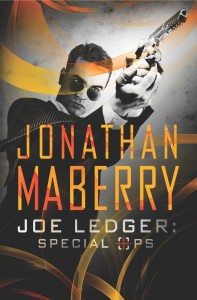 JournalStone Publishing proudly announces the release of Joe Ledger: Special Ops, a collection of short stories by Jonathan Maberry on April 25th.   To get your very own copy, just click here.

Captain Joe Ledger. Former cop. Former Army Ranger. Currently the top-kick of Echo Team, an elite squad of first-class shooters who roll out to face down the world’s most dangerous terrorists. Not fanatics with explosive vests or political hostage takers. Joe and his team square off against terrorists who have the most advanced and exotic weapons of mass destruction. Designer bioweapons. Cutting edge transgenics. Real mad scientist stuff.

If they have to call Joe Ledger – it’s already hit the fan.

JOE LEDGER: SPECIAL OPS collects several of the Ledger short stories and presents two brand new tales exclusive to this volume. Bonus features include character profiles and a never-before-published glimpse behind the scenes of the Department of Military Sciences.

ARTIFACT – original short story
Joe Ledger goes after an enigmatic device that could hold the key to permanent sustainable energy –or could become the most dangerous weapon on earth.

THE HANDYMAN – original short story
Joe Ledger is naked and unarmed and has to escape a high-security facility armed with whatever he can find. Expect Joe to get cranky.

Bonus features include character profiles and a never-before-published glimpse behind the scenes of the Department of Military Sciences.