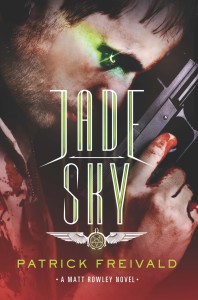 May 16 2014 – JournalStone Publishing is proud to announce the release of Jade Sky by Patrick Freivald.  The author of  previous JournalStone books Twice Shy, Special Dead, and Bloodlist has crafted a spellbinding tale that will keep you enthralled from the very first page.  Building both critical and commercial success with each new release, Freivald has become a significant new voice in the horror genre.  You can get your copy of Jade Sky today online and at select bookstores in your area.

Matt Rowley hasn’t been human for years. A commando for the International Council on Augmented Phenomena, he hunts down superhuman monsters the military can’t handle. But his abilities come with a price: bloodthirsty whispers that urge him to acts of terrible violence.

An encounter with a giant, angelic being with wings of smoke and shadow casts him into a world of inhuman brutality, demonic possession, and madness, where he must choose between his family and his soul.