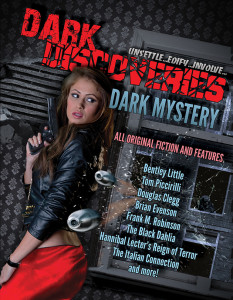 JournalStone Publishing announces the release of Issue #27 of Dark Discoveries Magazine on April 30th.  If you enjoy the very best in original horror fiction, interviews with the best of today’s horror authors, and news and features on all things horror, then this magazine is for you.  Just click here and you’re one step closer to receiving the best horror magazine on the market today.  Here is what you’ll get in the latest issue:

Funerary Rites by Douglas Clegg
BearHeart by Brian Evenson
Communication Breakdown by Maurice Broaddus
The Exchange by John R. Little
The Pen by Bentley Little
My Secret is the Faces in My Hands by Tom Piccirilli