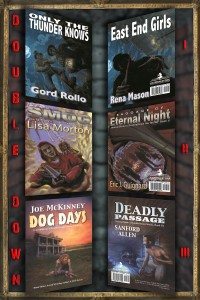 The good folks at JournalStone have a great deal on their Double Down series.  Just click here to find out how you can buy all three Double Down books for just $9.95.

JournalStone’s 2013 Triple Double Down bundle takes all six authors from the Double Down series in 2013, all six books, six front covers and combines them into one package.  If you are interested in the DoubleDown series, this set contains everything you could ever hope to ask for.  All for one LOW price!

Only The Thunder Knows:  William (Billy) Burke and William Hare were two real-life, beer-swilling, fist-fighting lowlifes who managed to stumble their way into infamy in Edinburgh, Scotland in the late 1820’s. Step by step, they graduated from the unemployment line to petty thievery, to grave robbing, and then on to cold bloody murder – ultimately becoming Britain’s first documented serial killers. What history doesn’t know about, or consider is the possibility that Burke and Hare may not have been acting on their own; and the blame for those heinous crimes might not entirely be theirs. Two mysterious strangers have arrived in the city – an old sculptor and a stunningly beautiful actress – both of which use their money and influence to manipulate the young Irishmen into searching for an ancient artifact rumored to have the awesome power of Heaven and Hell combined.

East End Girls:  Seized by the vicious killings of Jack the Ripper, Victorian London’s, East End is on the brink of ruin. Elizabeth Covington, desperate and failing to follow in her beloved father’s footsteps, risks practicing medicine in the dangerous and neglected Whitechapel District to improve her studies. News of a second brutal murder spreads. Elizabeth crosses paths with a man she believes is the villain, triggering a personal downward spiral taking her to a depth of evil she never knew existed. Only she knows the truth that drives the madness of a murderer.

Smog:  In Smog, tomboy Joey thinks she’s got the perfect life: It’s 1965 and she lives in an idyllic Southern California suburb where everyone works for the aerospace industry. But when something goes wrong with a rocket test, the smog thickens and the teenagers change into rampaging killers. Can Joey survive long enough to escape the neighborhood before she joins their ranks?

Baggage of Eternal Night:  Joey Third will gamble on anything, but the old suitcase he wins at a baggage auction turns out to be a bad bet. Inside is a record player, and the song it repeats lures the listener to surrender to its mysterious voice. Charlie Stewart senses the music’s intent, but can he find a way to turn it off forever, or will the cursed song possess the souls of all who listen?

Dog Days:  It’s the summer of 1983 and the suburbs of Houston are reeling from a disastrous hurricane.  But the storm brought more than wind and floodwaters.  In the swamps that surround Clear Lake a brutal and possibly supernatural killer is gathering strength, and waiting for the full moon.  The focus of his bloodlust is fifteen year old Mark Eckert.  Reckless to a fault, with a knack for making spectacularly bad decisions, Mark had planned to spend that last summer before high school wandering the swamps with his friends and his beloved dog Max.  But after a chance encounter with the lunatic, Mark’s summer becomes a time of terror and tragedy.  With his life on the line, Mark’s courage will be tested to his limits and beyond as he struggles to survive the hottest days of summer: the dog days.

Deadly Passage:  Just after the American Revolution, the slave ship Lombard sets off from Africa, beginning its brutal passage to the New World. But even this ship’s hardened crew of thugs and drunkards is unprepared for the horrors ahead. When the Lombard’s human cargo dies one by one, free black crewman George Bell suspects a stealthy and devious stowaway — not disease — is the cause. As the death toll mounts and the slaves threaten mutiny, he must choose between his humanity and duty to a callous captain. But Bell doesn’t have much time to make his voyage of self-discovery. The deadly beast burrowing through the rotten guts of the Lombard grows more powerful with each life it takes.