Lionsgate’s new horror film JESSABELLE gets a special sneak peek with a BRAND NEW FIRST LOOK today on Yahoo Movies! Feel the suspense as you see Jessabelle being haunted by a tormented spirit in her childhood home. After returning to Louisiana, Jessabelle must fight for her life against this evil which has no plans of letting her escape. Be sure to check out the new image below, but also tune in this THURSDAY for the full length first trailer on YAHOO MOVIES!

See the FIRST LOOK on Yahoo Movies here: https://movies.yahoo.com/blogs/movie-news/jessabelle-exclusive-first-photo-horror-movie-jason-blum-033729334.html
THAT’S NOT ALL! Keep up with everything JESSABELLE by adding JESSABELLE1988 to your Snapchat! Get exclusive sneak peeks, messages from filmmakers, and opportunities surrounding the film’s release ONLY by following JESSABELLE1988. Don’t miss a single, terrifying moment from JESSABELLE!
#Jessabelle 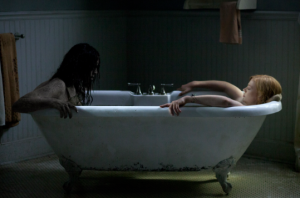