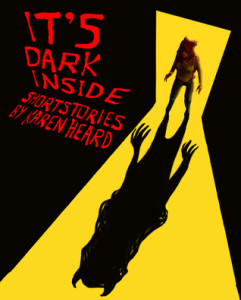 While I will read any and everything, I go out of my way to read horror. It can be one of the most atmospheric genres out there.  When I come across horror written by women, I rejoice because I think women are underrepresented in the realm of horror writers.

Unfortunate because It’s Dark Inside by Karen Heard is a prime work of dark fiction. Her collection includes a ghost story, a mystery, and plenty of suspense.

It’s unsettling, but not gory. Disturbing, but not squicky. Each story begins innocently enough, then nosedives into the deepest parts of what we fear and what we destroy because of it.

Dark Inside hearkens back to the core of terror—isolation. Be it physical, or emotional, or cultural, isolation is what makes us vulnerable and afraid. No one is coming to help you and you’ll have to figure it out alone. But if you’re wrong…

Heard’s style of writing is one I enjoy. She has a deft hand with details so I can fill in my own imagery. Involving my imagination like this gets me to play along with the author and makes her subsequent reveals more impactful. Broad-brush description forces you to create your own mental picture of a character—and if you’re like me—my conjured fears are more terrifying than what almost any writer can put on the page.

The characters use all five senses and some even that elusive sixth, where you can feel that something just isn’t right. Under utilized in many works of fiction, the technique is effective here.

A bit about each:

The Lighthouse: Atmospheric tale of the measures that loneliness can drive a body to.

The Promise: Reads like a parable with the moral being, “Think before you speak.”

Out of Order: Stay away from creepy little girls in abandoned trains.

Snap: An excellently plotted tale of “What we love, we destroy.” Made me question do we have the right to be observers of everything?

The Picture: Reminiscent of Wilde’s “The Picture of Dorian Gray.” The least dark ending of these tales, but not by much.

Inside:  Left me disturbed and thinking about the story for a few days afterwards. Heard is skillful in crafting the mental decline of a character.

About a year ago, I was on a judging panel for a writing contest where all of the entries were stripped of information about the authors before they were given to us to read.  A fellow judge commented on one of stories that she “could tell that the author was a woman.”

I will state the same about Dark Inside. It was the vibrancy of the carefully chosen words, which is even more important to the short story format than it is for novel length works. And I recommend reading it.