‘It Follows’ To Receive A Wide Screen Release! 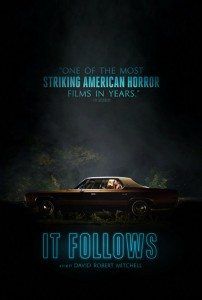 RADiUS proudly announced today that the company is going wide with their smash success IT FOLLOWS. One of the best-reviewed films of the year will expand to 1,200 theaters on Friday. Bolstered by strong word of mouth and critical acclaim, audiences came in droves on opening weekend – Friday, 13th – earning the film $160,089 in just four locations for a per theater average of $40,022. IT FOLLOWS had the best limited opening for a horror film since PARANORMAL ACTVITY, boasting 94% on Rotten Tomatoes and garnering over $600,000 in box office to date.

IT FOLLOWS was written and directed by David Robert Mitchell and features an up and coming ensemble cast that includes Maika Monroe (THE GUEST, THE 5th WAVE) in the lead role.

Monroe plays 19-year-old Jay, who, after a seemingly innocent sexual encounter, suddenly finds herself plagued by nightmarish visions. She can’t shake the sensation that someone, or something, is following her.

As the threat closes in, Jay and her friends must somehow escape the horrors that are only a few steps behind.

IT FOLLOWS will be available on VOD and DVD later this year after its theatrical run.