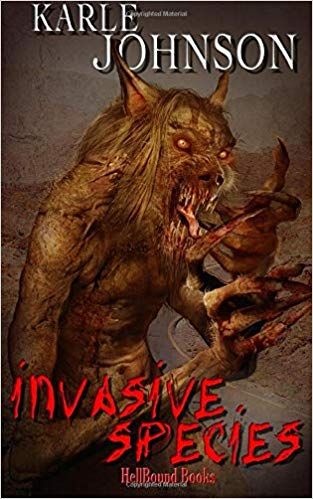 Lord knows I love my creature features and Invasive Species is the written form of that stylistic oeuvre. I could picture the Syfy channel taking this on, and it really would make for a great movie as it has strong visual elements.

Something is attacking the livestock on Ranse Everly’s ranch in Maldus, Arkansas. It’s not a mountain lion, not a bear, not a Chupacabra: none of the usual suspects. It is none other than our favorite carnivore incarnate, the Rougarou, the lycanthrope: the werewolf. What sets Invasive Species apart from the standard werewolf story (besides not being centered around newly post-pubescents dealing with their “changes”) is that the “disease” for lycanthropy is truly invasive. A person can become a werewolf simply by touching another who has the disease. Sneezing transmits the germ, as does a simple kiss between a mother and child. This means the ratio of towns people to werewolves shifts rapidly until it becomes a lycanthropic apocalypse.

The description of the transition from man to beast is vivid and disturbingly welcome. An example of the wonderful detail that Johnson includes can be found in the aftermath of the alpha fight between two wolfmen, when he describes one of the monster’s rippling backs as a “scoliotic wave.”

The characters tend to lean toward the stock humans that inhabit creature features: the stoic ranch hands, the unethical businessmen, and politically persuaded police officers, but most are provided with unique details to their backstories so that they stand apart.

I enjoyed reading Invasive Species. It was pure escapism and thrilling in that special monster story way. My only caveat for obnoxious Grammarists (such as myself): the book would have been well served by one more trip through the editing gauntlet. So, put down the red pen, and lose yourself in Invasive Species.