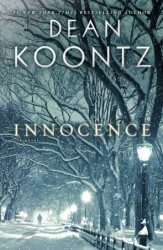 Before I begin this review, let me say that I managed to get an advance copy of Innocence.  The actual hardcover won’t be published until December 10th.  This is a great read, so be sure to run to the store and get it on the 10th.

Now, I have to admit that Innocence is one the most unusual novels I’ve ever read, especially by Dean Koontz.  Not only is the storyline different from the author’s other books, but I had distinct feelings of déjà vu throughout the entire reading of the novel.  That’s not to say I felt as if I’d read the book, or something like it, before.  It was more as if I’d actually lived various parts of the story sometime during my life time.  The thing is I knew I hadn’t; yet, the feelings were so strong I could almost see images of that particular life as they attempted to force themselves to the forefront of my mind.

The answer to that is certainly a big maybe.

Needless to say, it left me with a ton of unanswered, rather bewildering questions and nobody to turn to for help.

Okay, but what about Innocence by Dean Koontz?

The story deals with Addison Goodheart, who, as a young boy, was turned out by his mother, and forced to leave their isolated home out in the wilderness.  Since his birth, no one could stand to look at Addison’s face, or to gaze into his knowing eyes.  To do so turned people mad with an uncontrollable rage that was viciously directed at the boy.  This rage caused them to not only want to kill Addison, but to literally destroy him.   Even his mother could only bear to look at his face for so many years before finally throwing in the towel and making the child leave to fend for himself in the woods surrounding their cabin and then in a large city where he would have to avoid people at all cost or risk being killed.

Fortunately for Addison, he happens upon a man who appears to be in the same boat as he with regards to his facial features.  The adult offers his hand in friendship and takes the boy under his wing to live in the tunnel system underneath the city.  Together they flourish with the man teaching the boy everything he knows about survival.  Tragedy, however, erupts after a few years and Addison once again is alone.  That is until he sneaks into a closed library one night to read and witnesses a girl (Gwyneth) about his own age, fleeing from a well-dressed man who seems intent on killing her.

Luckily, Gwyneth manages to escape the killer and through a strange turn of events, become friends with Addison.  It’s love at first sight for Addison because Gwyneth is a real beauty, but she can’t bear to be touched or to be around people.  Still, she accepts Addison into her life.  On many levels they are both alike in their sorrows and inner spirit.  In fact, they are kindred spirits.  Gwyneth also makes it a point not to look at Addison’s facial features, understanding his need not to be seen by anyone.

Before long, Addison gets caught up in Gwyneth’s unusual adventures that deal with her murdered father and the man who’s after her.  They will have to figure out a way to defeat this individual and his accomplices if they want to survive the next twenty-four hours.  What the two young kids don’t realize is that this is only the tip of the iceberg and making it through the day is nothing compared to what’s ahead.

Dean Koontz has proven himself to be a master of character development.  He has a unique skill at being able to create relatively innocent children or adults, and then of putting them into highly dangerous situations with villains who are filled with such inner darkness that there’s not a shred of light emanating from their souls, if they have one.

Such is the case with Innocence.

You have a young boy whose heart is overflowing with compassion and love; yet, no one can gaze upon his face or look into his eyes.  Then, you have a young, beautiful girl who is literally a genius; yet, she can’t bear to be around people.  Together, these two individuals will have to face the ultimate evil within humanity just to live for another day.  With all of this going on, the reader learns to care about these kids and to hate the men who are after them.  It takes a great deal of talent to hook harden readers like this, and Dean Koontz does it in spades.

Innocence, however, shines in a way few other books do.

The reason for this is that the majority of readers will find themselves questioning how they would react if Addison came into their lives, even if only for a minute.  Would they accept him or shun him?  I imagine all of us would like to believe we’d do the right thing, but the truth is we’d probably run from the thing that scares us, or even attempt to destroy it.  Fear tends to do that with people.  I suspect only a small part of humanity would be able to accept Addison with the love and compassion that he, himself, offers so freely.

Another thing I learned by reading Innocence is why I find it very difficult to be around a group of people.  I’ve always been like this and have preferred to be by myself.  This is ironic in that all of my jobs during the last forty years have dealt with the public.  Now, I can identify with Gwyneth’s condition with a clearer understanding.  Though I’m sure the author would deny this, I’m beginning to feel that the recent novels of Dean Koontz are also designed to unconsciously teach the readers how to be better human beings and to like dogs.

Though it’s not important to the enjoyment of Innocence, Dean Koontz works every bit as hard on each upcoming book as he did at the beginning of his career so many years ago.  He may write each page thirty, forty, fifty, or even seventy times in order to find the right words needed to tell the story.

Finally, another great thing about Innocence is that it’s coming out before Christmas this year, instead of after.  I’ve often wondered over the years why the publisher didn’t have Dean Koontz’s novels coming out before the holidays so people could buy them as presents.  Bantam Publishing has finally wised up and done the right thing.  I already know who I’m giving a copy of Innocence to as a Christmas present.

Is Innocence Dean Koontz’s best novel?  That’s a tough call when considering how many great novels this author has written over the past few years.  For me, the number one spot would have to go to Odd Thomas, but Innocence would definitely be in the number two position because it offers hope for mankind and that’s what is really important.  Mankind needs all the hope it can get at this stage of the game.  Highly Recommended!