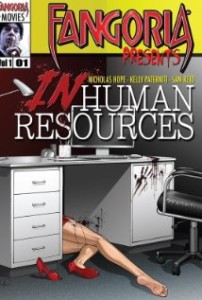 Fangoria magazine is THE magazine for horror aficionados. Since their inaugural issue back in 1979 they have been the first name in reporting on horror films and videos and have wet genre fan’s appetites with many great articles, reviews, etc. Earlier in the decade they “presented” two horror short anthologies for home video featuring the winners of the magazine’s “Blood Drive” horror short contest. Now they are putting their name on a series of horror films to be distributed in the U.S. under the “Fangoria Presents” banner.

The first of these films that I will review is Inhuman Resources. It is an uneven yet creepy film from Australia that could be considered a very distant cousin of the cult masterpiece American Psycho.

“My name is Redd and I’m your new boss.” These words become a terrifying statement as we meet a former office manager, Thomas Reddman, who was convicted of being “The Headhunter”, a serial killer who preyed on corporate department heads (literally!) and CEOs. He was sentenced to life in prison but manages to escape. He takes six people hostage who were directly involved in his conviction, such as his defense lawyer, the cop who caught him “in the act”, and others. Over the course of a brutal and violent night he tries to make them believe he was not the killer. Now, however, he has gone insane and does make certain people pay for their mistakes by using extreme violence. It is a twisted take on the micro management style of the business world.

British character actor Nicholas Hope plays Mr. Reddman. His performance is the best one in the film. Hope plays the character with the proper dementedness and black humor. Reddman chains his captives to their cubicles and forces them to reexamine the evidence to see how they went wrong in thinking he was the murderer. For his defense attorney, he is forced to discover vital clues that he missed during the trial. The penalties for mistakes are severe beginning with carving a line in the offending “employee’s” forehead. After five strikes, the punishment becomes gruesome. Reddman is, quite literally, the “Boss from Hell”.

The good news for gore fans is that the effects in the film are done by the master of gore, Tom Savini. The blood does flow but not to excess and when the splatter scenes arrive, they are a welcome return to old style filmmaking. There is not an instance of CGI in the film and that is quite a relief these days.

The supporting cast is made up of five so-so actors and one silly performance by the director himself. The best of the lot is Kelly Paterniti as the film’s heroine. She plays a girl who moonlights as an online stripper while trying to make her way in the corporate world.  Paterniti plays the role with spunk and is a nice anecdote to the rest of the supporting cast who, frankly, aren’t very good.

The setup of the film, with six strangers waking up chained and forced to figure things out or die trying, is close to the Saw series but the comparisons do stop there. This film, while not completely successful, is unique in certain ways.

The director, Daniel Krige who makes low budget Australian horror films, wisely lets the dialogue and characters move the film along. The scenes of the hostages sitting around the tables trying desperately to figure out why they are there are interesting and well written.

There is trickery in the filmmaker’s plan, as this is not just a “psycho goes nuts” film. Reddman has good reason for becoming insane and by the film’s clever conclusion; we will see him in a different light. There is a mystery to be solved and we have some fun getting there. The twist itself is quite unexpected and you will have fun with it! The final act in the film is an almost stand up and cheer moment.

The big problem with a good part of the film lies in its pacing. It drags in the middle section and slows down our enjoyment. I feel the film would have worked better and been tighter if it had been done as a short. 45 minutes would have been a good length and would have taken the film up a few notches.

Inhuman Resources is not a bad film by any means. It is an interesting and well done bit of horror cinema and one with an edgy sense of humor and respect for proper gore effects. There are simply some pacing problems that hinder a good chunk of the film.

The film is gory, somewhat original, and entertaining. While I do not completely endorse it, I do recommend horror fans see it. It is a good film that could have been better but, in today’s world of unoriginal horror films and remake after remake, it stands as a decent effort and a good time.