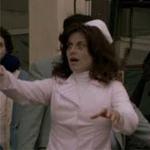 Infect Scranton has announced that Sharon Ceccatti (Hill) will be attending the 9/21-9/22 event in Scranton. Sharon Ceccatti (Hill) began her career in show business singing and dancing on stage in the Pittsburgh area, performing mostly in operettas. When she wasn’t working, she made a living as a hospital nurse for a downtown Pittsburgh hospital. She is best known for playing the “lead zombie nurse” in the horror movie, Dawn of the Dead (1978). She has become a horror zombie legend all across Europe especially and her face as the zombie nurse is featured as such on posters and many books.

She usually appeared as uncredited extras in movies some of which include, Hellraiser III, Knightriders (1981), Maria’s Lovers, Death Penalty, Silent Witness, Kid Brother, and many more. Sharon has had a long career for over 20 years as a movie and location casting director in casting principles, day players and extras. She has cast such films as, Dominick and Eugene, starring Jamie Lee Curtis and Ray Liotta; Lady Beware, starring Diane Lane and Michael Woods; Gung Ho, starring Michael Keaton; Mrs. Soffell, starring Diane Keaton and Mel Gibson; and All The Right Moves (1983) starring Tom Cruise, Leah Thompson and Craig T. Nelson. She has worked with directors such as Ron Howard, George A. Romero, Michael Chapman, Andrei Konchalovsky, and many more.

From there she became Assistant Director of Operations for eight years at a 26,000 seat amphitheatre where she had an office backstage where she could keep a handle on all theatre activities. During the season she had approximately 450 people working for her during the shows. Some of the acts that came thru were Billy Joel, Phil Collins, Janet Jackson, Van Halen, Jimmy Buffett, AC DC, Rod Stewart, Ozzy Osbourne, Brooks & Dunn, Steve Miller, Neil Young, Reba McIntyre, and many more. Moving on and joining the David Copperfield Tour, the world’s greatest magician as his personal assistant and appeared on stage with him traveling all over the world to Hungary, Czech Republic, Chile, Argentina, Venezuela, Spain, Mexico, Canada, Switzerland and 11 cities in Germany, putting on 500 shows a year, as well as playing at Caesar Palace in Las Vegas, Atlantic City and Lake Tahoe.

Since then, Sharon has been scouting locations for movies. The most interesting scouting was for a month in Spain and some days in Morocco looking primarily for bullrings. Occasionally being sent movie scripts, breaking down parts to see who is best suited to appear in the movie.