In the End – Book Review 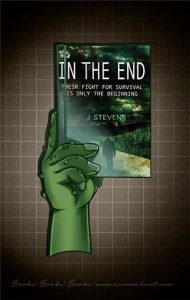 In the End: Their Fight for Survival is Only the Beginning
G. J. Stevens
November 2018
Amazon Digital Services
Reviewed by A. Renee Hunt

I’m an apocalyptic, dystopian kind of gal. Books written about the end of the world are interesting to many people like me because of the “What Ifs.” How one would react to a particular situation has run through minds on a daily basis since the Doomsday folks began prepping. Maybe longer, I don’t know, but I can say that I’ve always wondered how I’d react. Then again, I’m the daughter of a Marine.

So, In the End: Their Fight for Survival Is Only the Beginning, there’s a group of friends who are enjoying a group getaway. They packed up and left civilization for some outdoor fun that’s cut short. Indefinite. The owner bangs on their cabin door and tells them to leave their key and bug out! When they try to gather information on what’s taken place, they can’t figure anything out, other than there may be an invasion of sorts, possibly WWIII. It turns out to be a viral attack that brings on zombies.

What’s good about In the End is the nobody who becomes a leader. Everybody cheers for the underdog, yeah? Logan carried no military training or weapons skills; he’s just an every day Joe Blow. As a reluctant leader, he attempts to guide the baffled group, but no one wants to listen to him, let alone believe him. He does his best to protect his friends and they get angry with him. One gal, Naomi, wants to bash his face in on numerous occasions, but he’s right! While attempting to survive in a world where the government refuses to offer up information and everything else is cut off, what’s a guy to do but shove on.

The world according to zombies is unceasingly fluctuating, so I admit I enjoyed the zombies not playing possum for long. Once they died, that was it, then they returned in minutes. No play in-between. And as much as I know there’s no true science behind such creatures, these didn’t seem to die like usual zombies.

Now for what I didn’t enjoy concerning this novel. Many authors have trouble with sharing instead of saying. We’ve all seen it, and most have even done it. Stevens, though sharing a crack of a story, didn’t present in a fashion that was easy to read and follow along. The way he described things and situations made little sense to me, resulting in confusion. For example, in Chapter 20 a horde of zombies (I promise, no spoilers) is chasing after our survivors. Everyone’s running, while two are doing their best to keep a safe distance for protection. I didn’t understand what was happening in that scene. Not one bit. One second characters Andrew and Logan were running, then they were attempting to grab a hold of a friend’s hand to escape the horde. But I thought they were all running on foot? So why did they have to take hold of someone’s hand if they were headed in the same direction and not riding on the back of a truck/lorry?

Also, not explained was how their choice of weapons killed the dead. There was a girl who’d had an eye blown out, yet she was walking about. Hole in the head means brain is dead, yeah? So why did a shot to the head, directly in her eye not kill her… dead? Totally lost there, and it left me whelmed. Neither over or under, simply whelmed.

So there you have it, my take on In the End. Grab a copy for yourself while I move on to the next read. Cheers!