In the Court of the Yellow King – Book Review 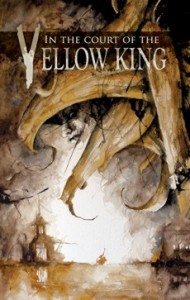 In 1895, Robert W. Chambers published The King in Yellow. A , a fin-de-siècle collection, including “The Yellow Sign”, “The Repairer of Reputations,” “The Mask,” “The Prophets’ Paradise,” and “In the Court of The Dragon,” which collectively weave together story of a play called The King in Yellow. This play, banned, burned, but never completely destroyed, has the power to drive the reader mad with its references to a supernatural being known only as The King in Yellow who can exert his control over minions, willing or not, though a glyph known as The Yellow Sign.

Chambers had borrowed aspect of this myth, most notably the city of Carcossa and the ancient god Hastur from earlier Ambrose Bierce stories. In turn, H.P.  Lovecraft added elements from Chambers into his work, and his circle similarly embrace the Yellow King. August Derleth, as he was prone to do, ignored precedence and made Hastur into a Great Old One, and the Yellow King as one of his avatars. Now in the aftermath of renewed interest in “him who eats time, in robes,” courtesy of HBO’s True Detective, more madness has been unleashed in the anthology In the Court of the Yellow King.

Editor Barrass is obviously insane, and not just because he’s an editor (it is apparently a job prerequisite), but from years of authoring dozens of Yellow King fiction pieces himself. In other words, he’s the perfect man for the job of compiling a collection of tales to drive the readers quite mad. And quite a sanity-rending collection it is. Starting with W.H. Pugmire’s “These Harpies of Carcosa,” a tale of an artist whose visions of dead Carcosa travel from his dreams to his canvas and ending with T.E. Grau’s flavescent crime noir “MonoChrome,”Barrass has chosen 18 auriferous stories, nearly 350 pages of madness, mayhem and inevitable doom. The TOC reads like a who’s who in modern horror, including contributions by CJ Henderson, Robert M. Price, Pete Rawlik, Cody Goodfellow, and Stephen Mark Rainey. But the real treats are stories by Jeffrey Thomas and William Meikle, who create new tales from their familiar haunts. The Thomas story is part of his dystopic Punktown oeuvre and Meikle offers an adventure of Carnacki, the occult detective that Meikle reinvigorated with tales that are superior to the originals by creator William Hope Hodgson.

You’d have to be stark raving mad to miss this collection.