IGN.com is reporting that the Samuel Raimi/Rob Tapert remake of the classic Evil Dead film will be released on Blu-Ray and DVD with Ultraviolet in the U.S and Canada on July 16th.

I’ll be honest.  I didn’t go see the movie when it came out in the theaters, though it did pique my interest.  I guess I’ll have to check it out now.

The following are the list of features that will be part of the package. 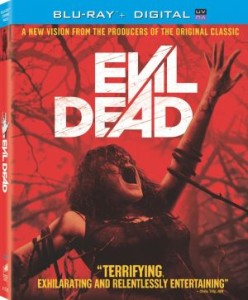