If You’re In Glendale, CA You’ll Want To Check Out This ‘Son Of Frankenstein’ Screening! 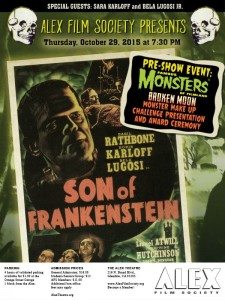 This Halloween, Famous Monsters partners with the Alex Film Society, a nonprofit organization, to bring you a night of both classic and reimagined monsters!

By 1938, Universal Studios was certain that the public appetite for horror films had faded and they abandoned the genre. That year, a nationwide reissue of Draculaand Frankenstein on a double bill, played to packed theaters across the nation and quickly brought them to their senses. Instead of a low-budget cheapie to cash in on the re-born craze for horror films, Son of Frankenstein (1939) under the direction of Rowland V. Lee, proved to be a handsomely produced entry in the cycle.

Filmed on the most expressionistic sets of any horror film since The Cabinet of Dr. Caligari, George Robinson’s gorgeous black and white cinematography captures every shadow, every out-sized distortion beautifully.

Son of Frankenstein is also blessed with perhaps the greatest horror film cast ever. Karloff gives his farewell performance as the creature and Bela Lugosi’s portrayal of Ygor is creepy, roguish, even pitiable and one is reminded of what a fine actor he could be with a role worthy of his talent. Presiding over all of this is the solid presence of Basil Rathbone as Baron Wolf Frankenstein. Watch for scene-stealer Lionel Atwill, who delivers his definitive screen role as the one arm, Inspector Krogh.

Sara Karloff and Bela Lugosi Jr. are scheduled to join us onstage at the Alex Theatre to discuss their fathers’ careers and the horror films that made them famous.

David Weiner, Managing Editor of Famous Monsters of Filmland magazine, will be on hand to do our celebrity interviews and present the finalist of their Monster Makeup Challenge. Since its inception in 1958, Famous Monsters has had a long-standing relationship with the art of practical movie makeup effects, going behind the scenes again and again to bring the magic of making monsters to fans across the country. In 2015, FM launched its first original comics imprint, American Gothic Press. BROKEN MOON, written by Steve Niles and illustrated by Nat Jones, is AGP’s first title to feature classic black and white movie monsters, and served as inspiration for the four makeup categories.

Famous Monsters is excited to support the Alex Film Society in their mission to present classic films on the big screen at the historic Alex Theatre in Glendale, CA.

October 29th: doors open at 7 p.m., the program starts at 7:30 p.m. Tickets are available for purchase at www.alexfilmsociety.org