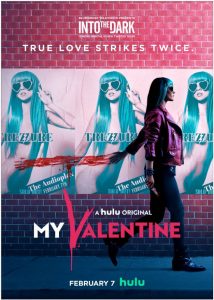 Influenced by some of the biggest pop scandals over the past decade, My Valentine follows Valentine, whose songs and artistic identity have been stolen by her ex-boyfriend/manager – and shamelessly pasted onto his new girlfriend/protégé, Trezzure.

Writer/director Maggie Levin imagines what happens when the two worlds collide and find themselves face-to-face. Locked together in a small concert venue after hours, the three of them confront the scars of the past…until they take things into their own hands.