HP Lovecraft’s The Hound and Other Stories – Book Review 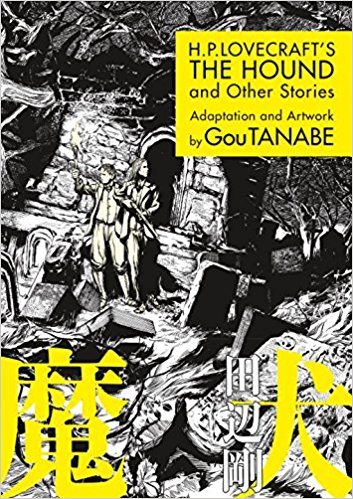 HP Lovecraft’s The Hound and Other Stories
By Gou Tanabe
Dark Horse Comics
To be Released on July 25, 2017
Reviewed by Brian James Lewis

WOW! This is an incredible adaptation of three HP Lovecraft tales into graphic novella form by a very talented artist! I pretty much trashed my whole day so I could read this cover to cover! And you know what? I have a pretty strong feeling that a lot of other Horror fans are going to be doing the very same thing when Dark Horse releases this amazing work by Gou Tanabe on July 25th!

While I cannot claim to be an expert on Howard Phillips Lovecraft, I have studied him and read his stories in the wee hours of the morning during a full moon (for real!). Besides the issues that people may have with Lovecraft, the truth is that he was a damn good storyteller! His stories endure because of the way they engage the reader’s mind. They set the stage with “Valuable metals not of this earth,” and things so horrible that the narrator will only take a stab at describing. This kind of writing opens the floodgates of our imaginations wide for all the Demons to come out and play. Gou Tanabe has soaked in all the madness, dark shadows, and creepy details of each story and put them on paper for us to enjoy. I will readily admit that I am fairly critical of other people’s interpretations of what I read, but these stories have been done a high level of justice.

The Temple begins with amazingly intricate artwork. We’re aboard a Nazi U-boat that is out doing the business of war. This boat seems to be a successful one that has just downed a British ship. However, a problem remains. There is a dead soldier clinging to the U-boat’s railing. The ship’s lieutenant and a few crewmen go pry him loose, only to find a rare artifact on him. The lieutenant sees the monetary value of the thing and slips it into his pocket, thereby sealing the fate of everyone aboard the ship. Soon the men are sick, the ship’s engine blows up, and there is an attempt at mutiny. As a last hope for salvation, some of the crew members petition the lieutenant to get rid of the ancient stone idol. They are killed for their efforts. Eventually only the Captain and Lieutenant remain alone aboard a drifting sub with only battery power. Then it’s just the captain who finds his U-boat deep at the bottom of the sea in the lost city of Atlantis. As the ship runs out of power, the captain sends his diary to the surface in a sealed jar and enters a vast temple full of light and music. But how is that possible?

Ever consider robbing graves for fun and profit? The Hound illustrates why this is one very bad idea. As the young man telling the story says-

“God…May Heaven forgive the folly and morbidity which led us both to so monstrous a fate” Two young guys have been robbing graves and collecting rare items from the dead that might give them the powers of darkness if they keep studying The Necronomicon and abiding by the teachings of Abdul Alhazred. They entertain themselves this way for a while, until they make their really big score, a magic amulet taken from the neck of a grave robber in Holland who has been dead over 500 years. It is a jade idol of a winged hound, the legend of which the boys chuckle over as quaint. The Hound is enormous and very real. Many will die for their mistake.

Last, but definitely not least is The Nameless City which is about a man travelling through the desert in search of a lost city so horrible that it does not even have a name. A city of ancient powerful beings that were here on earth long before Christ and definitely before man. Our traveler sees how amazingly rich they were, yet their appearances under glass is horrifying. Why do they look so well-preserved? Is it because they aren’t really dead? Even the moaning wind betrays the truth of the temple and its inner world. Lovecraft often complained of horrible, frightening dreams that left him feeling weak and ill. Tanabe’s illustrations pound home the scary creatures that lived in those nightmares. This isn’t just a little noise under the bed or a tree tapping on the window. No funny monsters who want to be your pal like in a Pixar flick, either!

Should you purchase HP Lovecraft’s The Hound and Other Stories? Yes, you should! Then be ready to call in sick the next day. You won’t be getting any sleep!