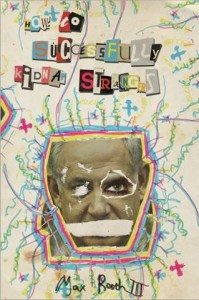 Max Booth III’s compulsively readable new novel, How to Successfully Kidnap Strangers, is an anthem for small, independent book publishers and authors. The novel is well constructed with a tight plot and solid, unique characters. Its story is a warts-and-all depiction of what goes into running a small press, though in this case readers will want to know what goes into the literary sausage. There are twists and turns that no one will see coming, because, really, when an angry (and likely quite intoxicated) author kidnaps a reviewer as revenge for bashing his books, where can things possibly go? For all its literary merit, sharp characterization and informative nature about the publishing game, the main selling point of How to Successfully Kidnap Strangers is that it just a great, fun read.

The characters are fantastic and loveable, the type of people you probably know in the real world if you’ve been making poor life choices. Harlan Anderson reads books, always illegally downloaded, and always with one purpose: to write bad reviews of them online. Nick is the editor-in-chief of the publishing company the group of friends works for, in varying capacities. BILF, or Books I’d Like to Fuck, publishes extreme fiction from little known authors, including Sergio Placid, who is something of a big name in a small world. Sergio has written dozens of books, despite being in his mid-twenties, and has had one real success, The Cumming of Christ. (Sorry. That is not a typo.) Sergio, along with Nick, have great character arcs and evolve with the plot and have very satisfying conclusions to their parts of the tale.

This is a book about revolution. Revolution against the mainstream publishing industry, against the traditional literary community, against any restrictions on authors and the work they create. But it’s also about revolution against responsibility, sanity and sobriety. Funny lines like “fuck James Patterson” or “fuck genre delineation” are actually backed with solid commentary and important, subversive ideas.

Written in such a clean, sharp style of prose, it’s like the words in the book are speed, they shoot directly to the pleasure center of the brain and make everything that follows faster, more intense, more pleasurable. The chapter breaks are an almost physical relief as they provide a short period of rest before the next hit of prose begins. Readers will wish that BILF was a real publishing house and that titles like The Trampoline Incident, Cock Mutants, Attack of the Chlamydia Kamikazes and even Harlan’s That’s What She said were sitting on their shelves waiting to be read. How to Successfully Kidnap Strangers is most certainly a BILF.