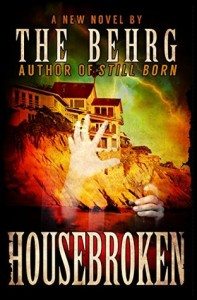 Housebroken is the debut novel from author The Behrg. It’s an exercise in extreme horror where the first act of violence quickly explodes into a non-stop sequence of brutality. The relentless pace of the story makes for a compelling read, and the twists and turns in the plot keep the reader guessing until the last page.

Blake Crochet and his family are new to Southern California, Blake having taken a high paying job with a cutting edge tech company. Before his first day of work Blake has the everyday experience of confronting an annoying door-to-door salesman. He rebukes the pitch to buy magazine subscriptions and sends the young man on his way. But they live in an exclusive gated community and Blake finds himself wondering how the salesman got into the neighborhood. Just as he has forgotten the encounter and begun to leave for work Blake’s car backs into something. He’s run into the salesman, mangled his bike and injured the man. Blake has no way of knowing that, when bringing the salesman into his home, he will begin a series of horrors that his family might not survive.

Blake and his wife Jenna are an interesting couple, each individuals that have an idiosyncratic relationship that can be good one moment and bad the next. Their son, Adam, is the most interesting character in the novel. He is facing the normal problems of a teen living in a new place and looking for his way. As the story develops Adam faces some serious challenges that go to the root of who he is, how he relates to his family and what extremes he is willing to go to. The main villains in the story are Joje, George with a serious lisp, and Drew. Drew is a henchman with no real personality, a place filler and Joje is a mystery, constantly shifting as the plot develops. The mystery behind Joje keeps his character from being fully explained or realized until the end of the book, but as a sadistic bad guy he fits the bill.

Housebroken is fast-paced and relentless in delivering action on top of action and horror on top of horror. There are a few points when the action is too much and strays from furthering the plot, but those occasions are few and apparent only in retrospect. The end of the novel is a bit problematic, with one plot twist after another, some of which seriously strain credulity. The final passage, however, is spot on and satisfying.

For those who enjoy their horror free of the supernatural, delivered hard and fast and without flinching from the brutal, Housebroken is a read not to miss.