House of the Witchdoctor on DVD/VOD 9/16

HOUSE OF THE WITCHDOCTOR CREEPS ONTO DVD/VOD SEPTEMBER 16, 2014

Leslie Van Hooten (Stephens) is mourning the anniversary of her boyfriend’s murder. Her father (Moseley) and mother (Easterbrook) leave her at the family’s isolated estate with her fellow grad students. The weekend takes a turn for the worst when Cliff Rifton (Kayser), a recently released career criminal, and Buzz Schenk (Willis), his drug addict sidekick are hell bent on raging a torturous killing spree. The killers soon realize all is not as it seems in the house. As the body count begins to rise, it seems death is the only escape from the house. 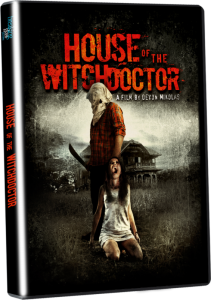