Horror on the High Seas 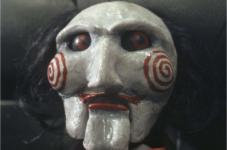 The horror of the Saw movies is taking to the waves during the “Official Saw Movie Cruise,” to be held August 11-16, 2012, aboard the cruise ship Carnival Glory. Saw cruisers will travel round-trip from New York to Canada’s Maritime Provinces. Fans of the Saw movies will find plenty to love on the Official Saw Cruise (www.SAWatSEA.com).

Every Saw Cruiser can meet, party and dine with stars of the Saw movies. Fans can take photos with many of their favorite actors including Saw franchise legend Costas Mandylor (“Hoffman”). In addition, Jigsaw’s “Puppet,” used and seen in the Saw movies, will be aboard and available for free photo opportunities.

Dan Yeager, who stars as “Leatherface” in the new movie Texas Chainsaw Massacre 3D, will also be on the cruise – and everyone on the Saw cruise will get a free Dan Yeager autographed photo. This is Dan Yeager’s first official fan appearance, and he will be signing autographs and taking photos with fans during the entire cruise.

All Saw cruisers receive a $50 shipboard credit per cabin applicable towards onboard purchases. All meals are included in the price of the Saw cruise, and food is available 24 hours a day. Cruisers will also have access at no extra charge to the shipboard amenities, including 22 lounges and bars, four pools (one with a 214-foot waterslide), nightclubs, a casino, spa, salon, gym, jogging track, miniature golf, duty-free shops, and restaurants, including a sushi bar, buffets, pizzeria, deli and steakhouse. Most of the ship’s extra spacious cabins (rooms) feature ocean views, and the majority of those boast private balconies.

This is the first Official Saw Cruise. The seven Saw Films from Twisted Pictures and Lionsgate are the most successful horror franchise in movie history.

For more information or to register for the Official Saw Cruise, visit Saw At Sea.