Horror in a Hundred – Perilous Pegasus by Cynthia Morrison 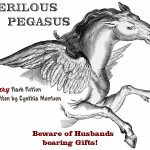 Joseph suddenly realized his dilemma and immediately began creating a laboratory.  There, scientists sewed wings to Frogs. All was a great success but unfortunately all the subjects flew away. As a surprise, wings were attached to his wife’s gifted horse. Morgan beamed as she sat upon her magnificent flying equine. “can he ride double?” She asked. “You don’t expect that I would attempt flight with you on this beast do you?” said Joseph. Morgan took flight upon her steed then replied “No Joseph, I was referring to Charles”. “Thwap” went the arrow that pierced Morgan.