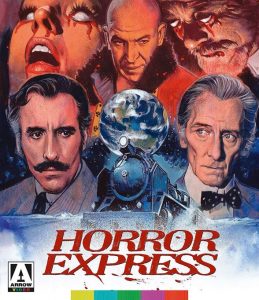 Horror Express is a horror film starring Peter Cushing and Christopher Lee now on Blu-ray from the awesome folks at Arrow Video. That should be all you need to know to pick this one up as soon as you can. However it is also in the public domain and as such, if you own any “Big Box O’ Horror” 50 or 30 or whatever boxsets, then chances are good you already have a copy of this film somewhere. I mean, I had it on four different collections before getting this new Blu-ray in for review. So the question then becomes, is it worth getting again, as a standalone product, that probably costs more than any of the multi-movie boxsets it’s already on? Well, grab your train ticket, don’t forget your mittens, and let’s find out.

First, while the original story is credited to Gene Martin, many people, myself included, think it’s an uncredited adaptation of Who Goes There?, the novella by John W. Campbell, Jr. that would become a little film called The Thing from Another World and later remade by the master, John Carpenter, as The Thing. Let me give you a brief description and you decide.

Christopher Lee plays a British anthropologist in the early 1900s returning from Manchuria on the Orient Express with his most important discovery ever, the frozen remains of a primitive humanoid creature that could be the missing link in human evolution. He meets his friendly rival smarty pants, played by Peter Cushing, on that train and wouldn’t you know it, the frozen dead thing in the luggage car isn’t dead at all. In fact, if you look it in the eye then you die and it takes over your body. Then it can body jump again and again until no one knows who on the train is human and who the undying thing is. Oh and did I mention that this caveman is actually from outer space from thousands of years ago? Yep, so you get a shape changing alien that froze, but didn’t die, a long time ago, being discovered by scientist who then become trapped with this Thing, not knowing who is human, who they can trust, in the freezing, snow-covered countryside. Yeah, this film is so not based off of Campbell’s story. Not at all!

Plagiarism aside you have Lee and Cushing both being awesome, Telly Savalas as a Russian Cossack, a mad monk (because again: Russia), cosmic horror, amazing science like taking the fluid from a dead man’s eyes and looking at it under a microscope to see the last image they saw while alive (science!), and some wonderful “who is the monster” paranoia. All this is ably directed by Gene Martin, whose real name was Eugenio Martín, as this is a Spanish movie doing its best to look like a Hammer Film and succeeding. So yeah, I love this movie a whole lot for all those reasons and more.

Let’s jump aboard the extras and special features Arrow Video has given us with this new Blu-ray. First the physical goodies that only Arrow seems to bother with anymore, and God bless them for that. Here that means a reversible cover and a 31-page color booklet. Nice. For the on-disc goodies we have an audio commentary with two well-known horror historians: Stephen Jones and Kim Newman. There is an interview with filmmaker Steve Haberman, writer of many Mel Brooks movies including Dracula: Dead and Loving It, that runs eight-and-a-half-minutes long. A weird pick to have on here but good on him for being a fan. There is an interview with Ted Newsom talking about his late friend, producer Bernard Gordon, that’s 15 minutes long. There is an archival interview with Bernard talking about making movies during the McCarthy Era that was recorded in 2005 and lasts 30 minutes, and then there is a 14-minute archival interview with the director, Eugenio Martin and one last blast from the past, another eight-minute archive interview with composer John Cacavas. Lastly there is a theatrical trailer, so for a public domain movie from Britain and the early 1970s, that’s not a bad roundup of extras.

Horror Express is a great movie. It is The Thing set on a train with Christopher Lee and Peter Cushing and it is as awesome as that sounds. If you don’t have a copy of this film yet, get this version of it at once. If you do already own this movie, get it again on this Blu-ray. Not only for the amazing picture and sound but for all the extras included. As such I can easily and highly recommend this one.