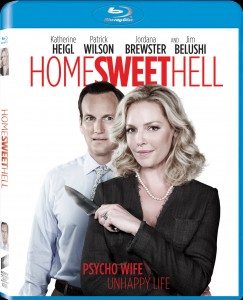 The dark comedy HOME SWEET HELL is available now on Digital HD and debuting on Blu-ray and DVD April 7 from Sony Pictures Home Entertainment. HOME SWEET HELL stars Katherine Heigl (Knocked Up) as Mona, a woman who will stop at nothing, including killing the competition, to save her seemingly perfect suburban life. Also starring in the film is Patrick Wilson (Insidious franchise), Jordana Brewster (Fast & Furious franchise), James Belushi (“According to Jim”), and Kevin McKidd (“Grey’s Anatomy”).

Bonus features for HOME SWEET HELL include two deleted scenes and the all-new featurette “Suburban Butchery: Making Home Sweet Hell,” which explores the script, acting, and approach that the writer, cast, and crew took to create the film. Exclusively available on Blu-ray are outtakes plus seven extra deleted scenes. Additionally available on Blu-ray is the full “Champagne Furniture & Rugs” commercial from in the film.

Synopsis:
Don Champagne (Patrick Wilson) seems to have it all: a successful business, a perfect house, perfect kids, and a perfect wife. Unfortunately, when his wife, Mona (Katherine Heigl), learns of Don’s affair with a pretty new salesgirl (Jordana Brewster), this suburban slice of heaven spirals out of control. Don soon realizes that Mona will stop at nothing, including murder, to maintain their storybook life where “perception is everything.” Directed by Anthony Burns from a screenplay by Carlo Allen, Ted Elrick, and Tom Lavagnino, HOME SWEET HELL was produced by A.J. Buckley, Anthony Burns, Jeff Culotta, and Sean McKittrick with Andre James Champagne, Phillip B. Goldfine, and Ted Hamm serving as executive producers.