His Own Mad Demons – Book Review 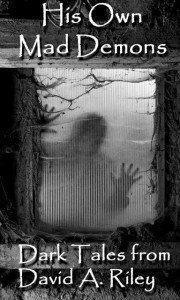 The central theme of the five stories in David A. Riley‘s original collection titled His Own Mad Demons is of the occult and demonology. Some of them take place around a British pub called The Potter’s Wheel and near an area named Grudge’s End. I have always liked that move when the author place their tales around a region whether it is real or fictitious. It gives it color and a continuity that helps create an aura of familiarity once you have the “feel” of the area in your head. And as is often with writers of fantasy and horror, they usually drop you in a place you would not necessarily want to visit and most certainly not spend the night.

I like Riley’s style. It is a little old fashioned and sort of Twilight Zone in character; putting ordinary people in supernatural situations that will tax their beliefs and challenge their will to live.

The title story is typical. It involves a couple of low level crooks doing a job that turns bad and quickly takes an occult turn in what first seems like a standard crime tale. It has a nice twist at the end and a satisfying shudder-inducing climax.

The second story titled “Lock-In” has a nice otherworldly feel, as regulars of The Potter’s Wheel become isolated for days in the pub, unable to leave into a pitch black darkness that dissolves them like acid if touched. This one has some nice shades of Hodgson and Machen to it but is still thoroughly modern.

“The Fragile Mask on His Face” also takes place around The Potter’s Wheel but is the weakest of the five. It involves a missing girl and doesn’t really go beyond the creepy occult killer (or is it something else?) stage.

The last two, “The True Spirit” and “The Worst of All Possible Places,” are the strongest pieces of fiction in the collection. They seem to speak to the writer’s strength of creating a believable fictional region with a mysterious past that includes an evil event and creating characters that will be believably tossed into the chaos. I enjoyed both of these stories but “The True Spirit” really left me in the mood to discover more about the strange town called Grudge’s End.

All of the stories kept my interest and all gave me a satisfying chill at the end. For this type of tale you really cannot ask for much else. They are the epitome of a “brief scare” and the occult horror story. Overall, it is a recommended “keep the lights on while reading” experience.