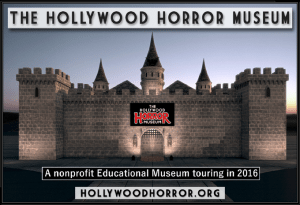 The NSF just announced the launch of their Kickstarter for the Hollywood Horror Museum. The museum, created by some of horror and Sci-Fi’s biggest names, will be the world’s first educational, non-profit museum teaching the history of horror in films, TV, literature and art, as well as filmmaking, makeup, costumes and special effects, from model making to computer graphics.

The museum coincides with the Hollywood Sci-Fi Museum and will have a permanent home in 2018.

The project goes back to 2012 when writer/fan Huston Huddleston found two Star Trek Enterprise Bridges in the trash at Paramount in 1998 and decided to restore them. The Hollywood Sci-Fi Museum was developed to permanently display all science fiction props, sets, costumes, and artifacts. They have nearly 100,000 followers and has 2.3 million Facebook views a week.

With the successful venture of the Sci-Fi Museum, the next logical step was the Horror Museum.

The Hollywood Horror Museum Kickstarter purpose is to raise funds for their 2016 World Tour, with a permanent museum tentatively 2018 in Los Angeles, next to the Hollywood Science Fiction Museum. Sponsors include Famous Monsters, Entertainment Earth, Shout Factory, Synapse Films and Severin Films. Rewards include rare items from Clive Barker, Tom Holland and all the board members.”

To learn more about the museum and to follow its progress, visit: