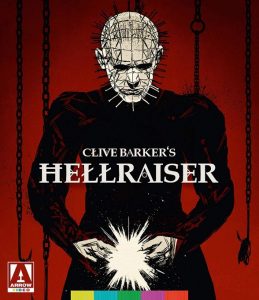 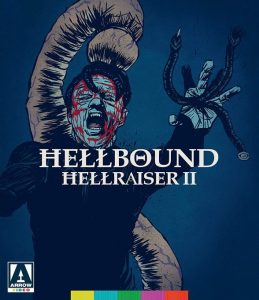 You know the Hellraiser movie, don’t tell me that you don’t. And only to a slightly lesser extent, you know the sequel, the one universally agreed upon good sequel: Hellbound: Hellraiser 2. I mean, to say that this movie from horror mastermind, Clive Barker, is an iconic classic would be putting things mildly. The cenobite, Pinhead, is as recognizable as Michael Myers, Jason Voorhees, Leatherface, and Freddy Kruger. Seriously, he’s in the Big Five. So you know how awesome these movies are, that is a known quanity, but how awesome are these new Blu-rays from Arrow Video? Is it worth upgrading flicks you no doubt already have in you horror home move collection? That is the question.

Yes. There, that is the answer.

Come on, this is Arrow Video. When they put out a Blu-ray they turn everything up to 11, and these two discs are no exception. As for the films themselves, yes they are amazing. They both still bring the creepy today and to call them something that revolutionized the horror scene would be an insult to all revolutionary things. And here they look and sound far better than they ever have before.

So let’s get on to the extras that Arrow Video has put on this one-two Blu-ray punch of Hellraiser awesomeness. For the first film, Hellraiser, there is an audio commentary with author/director Clive Barker. Then Barker comes back for a second commentary track, this time with star Ashley Laurence. Then comes a whole heck-load of featurettes. There’s one on the story of Hellraiser, another focusing on Sean Chapman, the actor who was Uncle Frank, and another talking to Doug Bradley on being Pinhead. There’s a featurette on the music from the movie as well as a vintage retrospective and a short press reel for the film. There is also a collection of trailers, TV spots, and an image gallery.

As for Hellbound: Hellraiser 2, there is a commentary track with director Tony Randel and screenwriter Peter Atkins. Mr. Randel and Mr. Atkins come back from a second audio commentary, this time with star Ashley Laurence. Hmmm, I sense a pattern here. And also like the other disc, there are a lot of featurettes to be found here as well. There’s one about the story of Hellbound, another conversation with Sean Chapman, even if Frank doesn’t get a lot of screen time in this movie, and another talk with Mr. Pinhead himself, Doug Bradley. There is also a featurette on the Labyrinth (or “hell”), a collection of vintage on-set interviews with cast and crew, and the lost “surgeon scene” has been found and is presented here. There is also a collection of behind-the-scenes footage, trailers, TV spots, storyboards, storyboards for the alternate ending, and a collection of stills and promo materials.

So yeah, no brainer here: both these movies are great, both of these new Blu-rays from Arrow are great, and all lovers of horror movies need to have these in their collections. ‘Nuff said. Consider both of them beyond highly recommended.